Remind me again: What is so great about Europe?

Maybe it’s because you can fly faster from America to Europe than westward to the U.S.?

But for whatever reason, a standard politically correct mantra these days is how if we would just imitate the Europeans, everything would be better. Which of the accepted five categories of propaganda this argument falls into – probably “bandwagon” – isn’t clear. But what’s also peddled is a corollary: the U.S. cannot be in the right if other advanced countries are doing something different.

The idiocy these analogies express runs apace. Recently the usual suspects took up a good part of a Newshour on the BBC [relayed, of course, by NPR] arguing just this. It was a rationale for rebuilding American infrastructure. There may be arguments for Vulgar Keynesianism, the belief the U.S. can spend our way out of recession and there certainly is strong justification for infrastructure rebuilding.

But these participants – the usual condescending Brit interlocutor and an American Council on Foreign Relations stalwart – were making a defense of President Obama’s campaign slogans for uninhibited infrastructure expansion with credit and debt. 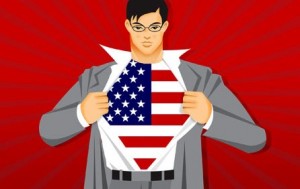 There also may be justifications for this Obama strategy. I don’t buy them. But they certainly are not found in imperfect analogies to other countries. Why? How to count the ways! Many give new meaning to the apples and oranges cliché, simply because of the enormity of the disproportions of the logic:

Population: Only the megapopulations of China and India exceed the U.S. as it heads into 350 million [including some 15 million uncounted illegals] with most other countries a fraction of that figure. And quoting that father of dialectical materialism, German philosopher Georg Wilhelm Friedrich Hegel; the quantitative increase in some entity, usually population, reaching a certain threshold, gives rise to a qualitative change in the structure of a society. Furthermore, the differences will grow for unlike Europe and most of Asia where the birth rates and population increase is slowing or actually dropping, the U.S. is expected to increase by 40 percent over the next four decades.

Geography: Only three countries are larger in land area than the U.S. None have the American advantages. Four of the world’s most productive agricultural climates, major river systems flowing south [instead of freezing in the Arctic] provide drinking water, crop irrigation and industrial production, hydropower, and shallow waters supporting marine life. The United States has a wide array of oil, natural gas, iron ore, coal, lead, zinc, phosphate, silver, and copper, benefiting industry.

Infrastructure: The U.S. has almost 50,000 miles of Interstate highway against, for example, 7,982 miles of Germany’s vaunted Autobahns. There are more than 600,000 bridges in America which dwarfs any other individual country, perhaps all of Europe. In a typical screed last year on the defects of American infrastructure – compared to Europe, of course – The Economist neglects the value America sets on its federal system for experimentation in a continent environment. [What a difference a year makes, given the collapse of the Euro. Is there hope our British cousins would revisit this whole argument?]

But the essence of U.S. uniqueness does not lie in either these misconstrued analogies nor in a simple recitation of magnificent American resources but in the intellectual origins of The Republic.

President Barack Hussein Obama, during his 2009 apology tour of Europe, when asked about “American exceptionalism” quipped it equaled other countries’ own concept of their special character. He couldn’t have been more wrong. For virtually every country in the Old World is based – if, unhappily, often falsely – on ethnicity, language or religion.

American identity has been ideological from its beginning. Religion, ethnicity and even language [Benjamin Franklin was worried about how much German was being spoken in the streets of Philadelphia during the Constitutional Convention and toyed with making English an official language] have always been diverse. What has held The Republic together for two centuries has been the concept of individual freedom, free enterprise and equality before the law – even when standards have not met the mark. In a sense, it doesn’t even matter if the concept is true. For like so many things in life, the perception of this American exceptionalism may be even more important than its reality. It has fueled the national ethos and probably will continue to do so as long as The Republic survives.

American exceptionalism, five categories of propaganda, Obama’s 2009 apology tour, Remind me again: What is so great about Europe?