In the waning days of the GOP’s majority in the House, Rep. Mark Meadows rallied Republicans to take a stand on border wall funding and urged President Donald Trump not to back down on the issue.

The North Carolina congressman, chairman of the House Freedom Caucus, was one of four House Republicans to visit the White House when Trump made the decision to turn down a measure that did not include wall funding, leading to a partial government shutdown. 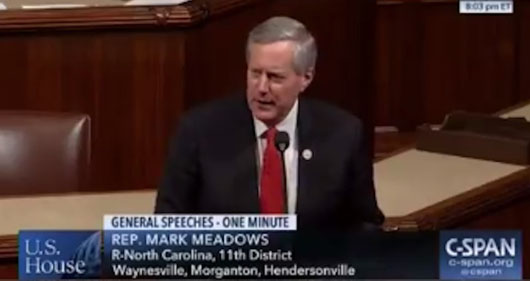 “You can remember the Alamo in San Antonio. It’s not because they won there, it’s because they fought there,” Meadows said. “If we’re willing to fight, I think a lot of people support the president and his willingness to fight. I support him in that.”

When Trump was reportedly showing signs of backing down, telling Senate leaders he’d be willing to sign a funding bill that did not include wall funding, Meadows and fellow Freedom Caucus members took to the House floor and delivered a series of speeches calling on Trump to fight for the wall.

Meadows played a key role as the House on Dec. 20 approved a bill that would fund most of the federal government through early February. The bill includes $5.7 billion for Trump’s border wall.

The measure passed in the House, 217-185, in a major rebuff to Rep. Nancy Pelosi who had been seen dancing and singing in a holiday celebration of Democrats’ victory over Trump on the border wall the night before.

In his Dec. 24 radio broadcast, Rush Limbaugh also urged trump to “hold firm” on the wall.

“This shutdown is one that the Democrats own,” Limbaugh said. “This would be very easy to resolve, and they don’t want to do it. They don’t want to do it, because I’ll tell you, if you look at the media today, the Washington Post today, CNN, folks, they have Trump gone in three months. They believe in three months they will have fractured Trump’s base. They think they will have split Trump’s base.”

The Washington Post “gives Trump three months – and by three months, they mean three months until this coalition is fractured to the point that the Senate might have 67 votes to impeach if the House Democrats actually bring up impeachment charges,” Limbaugh said. “Now, don’t misunderstand.  I don’t… (chuckling) I don’t think any of this is true. This is their mind-set. This has been their objective for two years.”

Limbaugh continued: “They think Trump is goofing up left and right, and they’re happy for it to be screwing up. They’re happy for this to happen! As long as they can peg it on Trump, like anything else, the Democrats will destroy whatever or weaken what for as long as it empowers them to so-called fix it later. There are even some really out-of-control leftists who would willingly take a financial hit if it meant getting rid of Trump.”

Limbaugh said he doesn’t think “we’re anywhere near that, but I’m just telling you that’s what they think. That’s why they’re in such good moods when you watch the Drive-By Media. They think it’s over, it’s just a matter of time now – and at the top of the list is the government shutdown. They are convinced that most Americans object to this, don’t like this, and, by tradition, blame Republicans (that would be Trump) for this. And they think Trump has just swerved into a self-destructive move here and so forth.”

Limbaugh concluded that “Whether it was a good move or not is irrelevant now. The point is stick with it.”