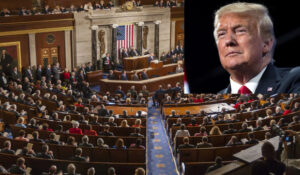 Congress has voted down a proposed commission to look into the events of January 6th after everyone realized that Trump actually won the election fair and square in 2020.

“Wow, I guess I never really saw it that way!” said Senator Chuck Schumer . . . . “The election was totally rigged! Total disaster! Completely and totally unfair!” Schumer then got on his computer right then and there to write an apology letter to Trump.

“Trump and Mike Lindell were right!” exclaimed Nancy Pelosi. “I can’t really blame Trump supporters for rioting at the Capitol anymore. I guess I would have done the same thing! Boy, was I an idiot! This whole experience has really put me in my place, that’s for sure!”

Multiple Evangelical leaders took to social media soon afterward to celebrate the fulfillment of prophecy, as Trump was “totally vindicated”.