Reddit has purged several moderators from the largest pro-Trump community on the site, reports say.

The Donald, which has 790,000 subscribed Reddit users, has been “quarantined” due to alleged “repeated misbehavior” since last year. 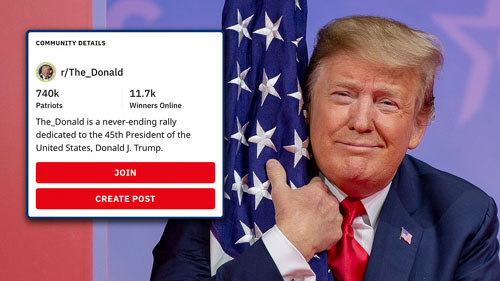 Reports say that the subreddit’s moderators were ousted on Tuesday and Reddit administrators said new moderators would have to be “vetted.”

According to a notice on the r/The Donald homepage, the subreddit is “restricted due to significant issues with reporting and addressing violations of Reddit’s rules against violence and other aspects of the Content Policy.”

“In the last 24 hours Reddit has begun sitewide banning people for even upvoting wrongthink, and has begun removing The Donald mods to replace with who knows,” one Twitter user wrote on Tuesday. In another tweet, the user said, “Reddit has begun the full takeover of The Donald.”

Rep. Jim Banks, Indiana Republican, has condemned Reddit for censoring the pro-Trump page, accusing the site of trying to tilt the scales against Republicans in 2020.

“I can’t think of a more obvious and effective way to ‘sway elections’ than to hide the largest conservative forum on your site a year ahead of the 2020 elections,” Banks wrote in a letter to Reddit CEO Steve Huffman in October.

“We literally cannot have anything anymore,” redditor savage4082 tweeted. “Anytime we have a platform to speak whether it be on social media, college campuses, or even just out in public, these assholes attack us and our free speech until the platform is taken away by any means necessary.”

“The real fascists are those who use every single ounce of their being to control and punish those who dare speak against their message,” savage4082 continued. “There’s only one side who does this in the United States and that is the left. This is simply another example.”

In a statement to Breitbart News, moderators of The Donald accused Reddit of trying to kill its pro-Trump community with “a thousand cuts,” and urged subscribers to migrate to thedonald.win, an independent Reddit-like site created by the pro-Trump community.

Reddit has been trying to slowly kill The_Donald since it played a role in getting Trump elected in 2016. It started with user harassment, moved on to restricting our posts from being seen by most of the rest of Reddit (The third highest-traffic website in the world), then entirely quarantining us from the rest of the website as well as search engine results.

In the last couple of days, China-backed Reddit has begun warning and banning our users not only for posting content that they disagree with, but even “liking” wrongthink. Finally, on Tuesday, Reddit admins removed more than half of the moderators that have spent the last four years of their lives building the number one Trump supporting online community and announced that they would be choosing users to replace us. Their post requesting new moderators was met with thousands of responses telling them, in no-so-nice words, to shove it.

As they’ve done with other Reddit communities, such as Kotaku In Action, they’ll be installing their own puppet moderators to continue to silence and dilute our message. Reddit knows that to entirely ban what is effectively the only conservative voice on their website would garner them too much negative press, and possibly legal attention, so they’ve been trying to kill off The_Donald with a thousand cuts.

In preparation for this inevitable course of events, the mod team established a backup website, free from the political censorship of Reddit, and have encouraged our users to migrate to it (of which at least 100,000 have in the last day). The_Donald can now be found on an independent website, created and run by the people that have ran The_Donald for years, at http://thedonald.win.