New York, by far, has had the most coronavirus deaths in the U.S., with over 32,000 as of July 20. The Empire State’s covid death rate is second — in the entire world — only to New Jersey.

Thousands of nursing home residents died directly as a result of Gov. Andrew Cuomo’s order mandating that the facilities take in covid-positive patients.

This is the coronavirus response that Dr. Anthony Fauci is praising.

“We’ve got to do the things that are very clear that we need to do to turn this around,” Fauci told PBS NewsHour on Friday. “Remember, we can do it. We know that when you do it properly, you bring down those cases. We’ve done it. We’ve done it in New York.”

“New York got hit worse than any place in the world. And they did it correctly by doing the things that you’re talking about,” added Fauci, director of the National Institute of Allergy and Infectious Diseases.

Sen. Rand Paul, a physician who contracted and recovered from the virus in March, offered a second opinion.

The Kentucky Republican tweeted on Tuesday: “Paging Dr. Fauci! According to JHU, NY’s per capita death rate is more than 2X greater than Italy Spain & Britain & more than 8X worse than Florida & 10X worse than Texas. For you to say NY got it done correctly disregards the facts & calls your judgement into question.”

Paul, an ophthalmologist, announced in March he had tested positive for covid. After recovering, he volunteered at the TriStar Greenview Regional Hospital in Bowling Green, Kentucky, which included treating coronavirus patients.

The focus of the dishonest leftist media in recent weeks has been on the rising number of covid cases in Arizona, Florida and Texas, all of which have also increased testing, while ignoring their lower death rates.

Democrat New York Gov. Andrew Cuomo was chastised last week after taking what CNN’s Jake Tapper called a coronavirus “victory tour,” touting his response to COVID-19 on NBC’s “The Tonight Show with Jimmy Fallon” and promoting a “New York Tough” poster, which is available on the governor’s website.

“There are no illustrations, however, of the more than 32,000 dead New Yorkers, the highest death toll by far of any state,” said Tapper. “No rendering on that poster of criticism that Gov. Cuomo ignored warnings, no depiction of the study that he could have saved thousands of lives had he and Mayor [Bill] De Blasio acted sooner, no painting there on the poster of his since-rescinded order that nursing homes take all infected patients in.” 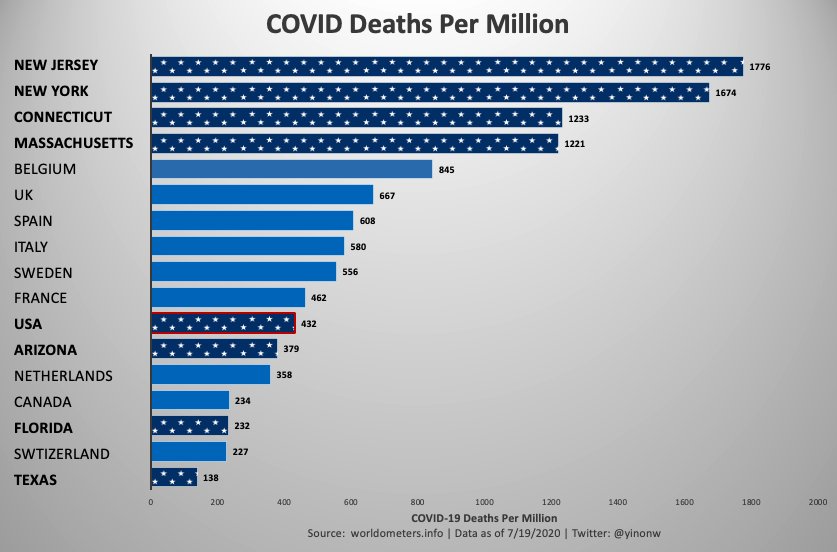