The Kremlin’s meddling in the 2016 U.S. presidential election was not surprising or new and was likely done in response to the Obama administration doing some meddling of its own in Russia’s elections, Sen. Rand Paul said on July 15. 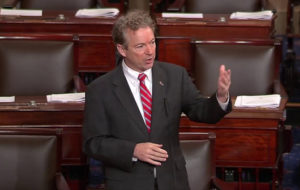 “I think really we mistake our response if we think it’s about accountability from the Russians,” the Kentucky Republican told Jake Tapper on CNN’s State of the Union. “They are going to spy on us, do spy on us. They are going to interfere in our elections, we also do the same.”

Russian President Vladimir Putin, during a press conference with U.S. President Donald Trump after their July 16 meeting, denied meddling in the 2016 presidential election but admitted he had hoped Trump would win, saying: “I wanted him to win because he talked about normalizing Russian-American relations.”

Paul said of Russia’s election meddling relating to America’s campaigns to influence foreign elections that “I would say it’s not morally equivalent. But I think in [Russia’s] mind it is.”

The senator continued: “It’s important to know in your adversary’s mind the way they perceive things. They react to our interference in their elections and one of the reasons they didn’t like Hillary Clinton, they found her responsible for some of the activity by the U.S. in their elections under the Obama administration.”

Paul also said it’s not reasonable to expect the Kremlin to admit its attempts to interfere in U.S. elections.

“We all do it. We need to make sure our electoral process is protected. We’ve forgotten the most important thing is the integrity of the election.”

Paul advocates making sure electronic records are “decentralized and we don’t store all of the data in one place even for a state.”

2016 presidential election, Kremlin, meddling, Rand Paul: Russia is ‘going to spy on us . . . and we also do the same’, Sen. Rand Paul, WorldTribune.com