Question: Can a U.S. senator escort an illegal alien across the southern border with impunity? 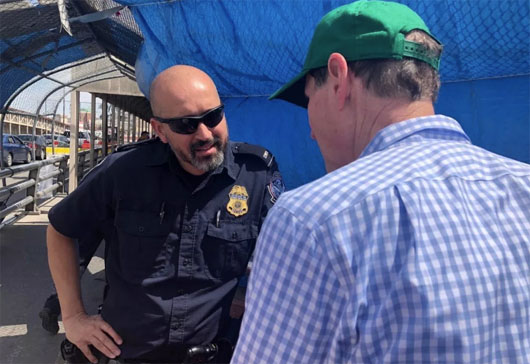 Question of the Day, July 29, 2019: Democrat Sen. Ron Wyden of Oregon staged an event in Juarez, Mexico in which he escorted a pregnant woman and her partner across the U.S. border: “We were essentially told early on by the customs official [at the border] that ‘No way that she could get in,’ then when they found out I was a U.S. Senator and we had a pediatrician with us, they changed their tune. Now that individual is going to be able to get the medical care that she so desperately needs.” Sen. Wyden claimed the border officials was guilty of a “blatant” violation of U.S. law. Others would say his action, approved by U.S. officials, violated U.S. law. What say you?

WorldTribune has introduced a new feature, Corporate Watch, that examines how activists in companies boardrooms impact the culture and public policy. How many of your friends, family members and associates are award that Barack Obama is still working to radically “transform” America and the West through his foundation?

I know they work to undermine our country. – Katie Knack

This Obama Foundation is covered by big companies like AT&T and the Kellogg Corp and many Silicon Corps, Actors, Producers and International World Order. Their goal is to change America to the Liberal socialism/ communism type of governing, Obama World. Netflix will issue movies supporting Obama way of thinking. Scary. – Mary Riddell

What work? The work to destroy a nation? – Peter Paul Borsellino

Only what they want us to know. Like the Clinton foundation – Don Hornbuckle

Question of the day, Question: Can a U.S. senator escort an illegal alien across the southern border with impunity?, WorldTribune.com