Both Joe Biden and Vladimir Putin have said that American consumers are about to pay a heavy price after Team Biden on Tuesday slapped sanctions on the Kremlin over the situation in Ukraine.

“As we respond, my administration is using every tool at our disposal to protect American businesses and consumers from rising prices at the pump,” Biden claimed, but added, “As I said last week, defending freedom will have costs for us as well, here at home. We need to be honest about that.” 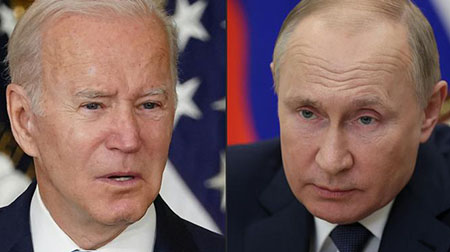 The sanctions include freezing the assets of two state-owned banks that service the Kremlin and Russia’s military. They also target Kremlin “elites” close to Putin and the country’s sovereign debt, strictly limiting the government’s ability to access Western financing.

In a post to the Facebook page of the Russian Embassy, Russian Ambassador the U.S. Anatoly Antonov said Biden’s sanction will “not solve a thing” in Ukraine and “will hit global financial and energy markets. The United States will not be left out, with its ordinary citizens feeling the consequences of the price increase in full.”

“If properly handled, there was absolutely no reason that the situation currently happening in Ukraine should have happened at all. I know Vladimir Putin very well, and he would have never done during the Trump Administration what he is doing now, no way! Russia has become very very rich during the Biden Administration, with oil prices doubling and soon to be tripling and quadrupling. The weak sanctions are insignificant relative to taking over a country and a massive piece of strategically located land. Now it has begun, oil prices are going higher and higher, and Putin is not only getting what he always wanted, but getting, because of the oil and gas surge, richer and richer. The U.S. was energy independent under the Trump Administration, an independence that we had never obtained before, and oil prices would have remained low. Now, what a mess our Country is in!”

Meanwhile, as U.S. major media outlets beat a 24/7 drum of warmongering, polling from Convention of States Action (COSA) in partnership with the Trafalgar Group found that just 15.3 percent of likely general election voters believe the U.S. should provide troops as “boots on the ground” in the event of a Russian invasion of Ukraine.

“The above-referenced poll of American attitudes toward conflict with Russia makes logical sense. Why would the average U.S. worker struggling to feed his family want to kickstart a war in a far-off land that doesn’t have any perceivable impact on his daily life?” Ben Bartee wrote for The Daily Bell.

“All that goes to show the state of ‘democracy’ in the West. It has no meaning any longer. If the people don’t want war, that’s exactly what they get. Window-dressing elections don’t matter; elites do whatever they want,” Bartee added.