UNITED NATIONS — The Russian Navy has harassed and seized three Ukrainian vessels in the narrow waters linking the Black Sea with the Sea of Azov.

The surprise incident in the Kerch Strait off occupied Crimea has reignited tensions between the two neighbors and refocused diplomatic attention on a slow burn crisis which has seen sharp artillery exchanges, land grabs, and the death of more than 10,000 civilians since 2014. 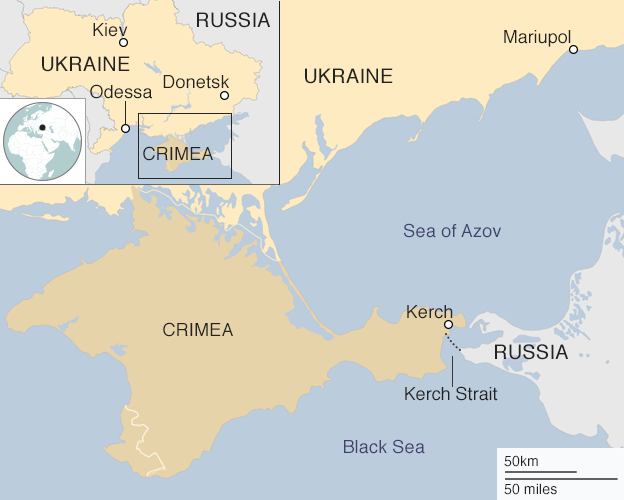 During an emergency meeting of the UN Security Council, U.S. UN Ambassador Nikki Haley stated forcefully that Moscow’s “outrageous violation of sovereign Ukrainian territory is part of a pattern of Russian behavior that includes the purported annexation of Crimea.” She added, “Impeding Ukraine’s lawful transit through the Kerch Strait is a violation under international law. It is an arrogant act that the international community must condemn and will never accept.”

UN Secretary General Antonio Guterres called on both sides to exercise “maximum restraint” and underscored the need to avoid “further escalation of the situation.”

In fact one vessel was rammed while transiting from one Ukrainian port to another. The Russians blocked the narrow Kerch Strait; three Naval vessels were fired on, seized and the 28 crewmen captured. According to Polish delegate Mariusz Lewicki, “for several months the Russian Federation has delayed hundreds of commercial vessels attempting to reach Ukrainian ports in the Sea of Azov via the Kerch Strait for extended periods and at great economic cost for Ukraine.”

So why the sudden flareup?

Since 2014 Ukraine and Russia have been conducting a low intensity border conflict in the Eastern regions of Ukraine adjoining Russia. While Moscow-supported proxy forces have seized sizable chunks of sovereign Ukrainian territory in the Donetsk regions where tense military standoffs continue, the big shift came when the Russians annexed the Crimean Peninsula. One of the Russian Navy’s largest bases is in Sevastopol. Vladimir Putin’s Crimean land grab has been condemned internationally and has triggered tough economic sanctions on Moscow.

Ukraine’s President Peter Poreshenko has declared limited martial law and has warned of an “extremely serious threat” of a Russian military invasion. Given the fast approaching Winter, it would appear a land invasion is unlikely. Nonetheless, Putin’s probing actions both on Ukraine’s adjoining land border and in the nearby sea lanes allow for wider low intensity mischief to test Europe’s and the USA’s reactions.

United Kingdom Deputy Ambassador Jonathan Guy Allen stated sarcastically, “Russia must not be allowed to re-write history,” by changing the reality on the ground.

Though Ukraine is on the European Union’s eastern doorstep, the Kiev government is not a member of either the EU nor NATO. Thus the political, economic and military protection offered by multilateral defense treaties does not formally apply.

The Trump Administration has nonetheless expanded defensive weapons deliveries for the Ukraine military. Prior to the current flareup, the U.S. approved $200 million in military assistance for Ukraine; this builds upon one billion already slated to help the Kiev government battle Russian-backed separatists in the eastern Donbas region. There are 200 American military advisers in Ukraine.

Indeed Ukraine’s economy has rebounded reasonably well to almost 3 percent growth, but still faces the simmering conflict with Russia along with entrenched corruption and political infighting in this country of 45 million people. Some sources opine that with highly contested presidential elections slated for the Spring, that Ukraine’s political class is using the crisis to solidify power.

The Kremlin’s need for a buffo nationalist move in face of lower petroleum prices and grumbling dissatisfaction with Putin may be part of the equation too.

Interestingly, a week earlier in Washington, Secretary of State Mike Pompeo while meeting his Ukrainian counterpart Pavlo Klimkin stated clearly, “the United States will never accept Russia’s attempted annexation of Crimea. We will continue to impose consequences against Russia until Moscow… returns control of Crimea to Ukraine. As a show of our resolve, just last week we imposed a new round of sanctions on the supporters of Russian aggression in Ukraine.”

Secretary Pompeo added forcefully, “We do not want our European friends to fall prey to the kind of political and economic manipulation Russia has attempted in Ukraine since it cast off its Soviet shackles.”

NATO Secretary General Jens Stoltenberg stated, “we call on Russia to ensure unhindered access to Ukrainian ports and allow freedom of navigation for Ukraine in the Sea of Azov and the Kerch Strait.”

Freedom of navigation is a time honored principle of international law despite Putin’s maritime provocations. So where do we draw the line? Or do we draw one?