Speaker of the House Nancy Pelosi and a delegation of Democrats had their bags packed and had boarded an Air Force bus on Jan. 17 to ferry them to the airport for a junket to Belgium, Afghanistan and Egypt.

Then came the order from President Donald Trump: Due to the government shutdown, Pelosi and friends were prohibited from using government aircraft. 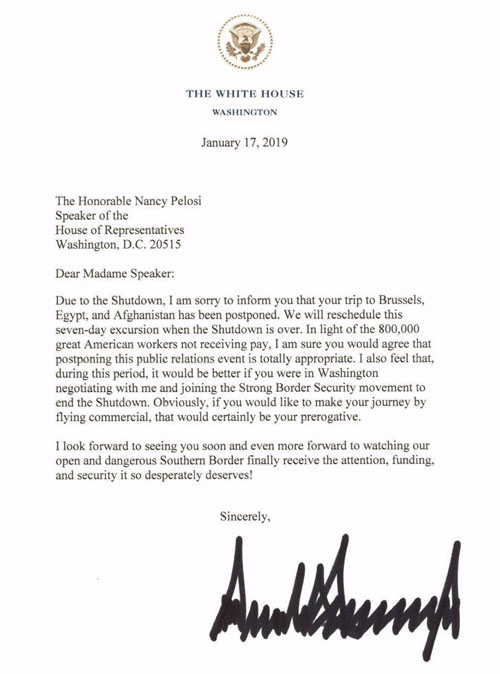 In the letter to the speaker, Trump wrote:

“In light of the 800,000 great American workers not receiving pay, I am sure you would agree that postponing this public relations event is totally appropriate. I also feel that, during this period, it would be better if you were in Washington negotiating with me and joining the Strong Border Security movement to end the shutdown.”

Pelosi “is not used to being treated like this, you see. She apparently expected she could cancel (ahem, ‘postpone’) the State of the Union address due to the shutdown – and then disappear abroad,” Pollak wrote.

In a statement, Pelosi’s spokesman said the purpose of the trip had been “to affirm the United States’ ironclad commitment to the NATO alliance,” something the president had already done earlier that day, Pollak noted.

“Her real goal was to conduct an alternative foreign policy – as she did after being elected Speaker in 2007, when she paid a friendly visit to Syrian butcher Bashar Assad.”

Pelosi’s “flack complained that President Trump himself had flown to visit the troops in Iraq early in the shutdown,” Pollak noted. “But Trump is the commander-in-chief, and Pelosi is not. How jarring for her to be reminded that although she might pretend the Constitution grants her equal power to the president, only Trump can turn the bus around.”

Levin suggested that instead of having a rally in lieu of the State of the Union address, the president should hold the address in the Senate.

“The United States Capitol building, ladies and gentlemen, belongs to you. It does not belong to Nancy Pelosi. It doesn’t belong to the Democrats. The president of the United States is going to give a speech to the nation, whether Pelosi likes it or not. And he ought to give the speech to the nation from the same building as every other president has used. And do it from the Senate: Explain that it’s perfectly safe and secure there, call her out in a very statesman-like way, and explain what he’s having to deal with. If he goes out in the country, in Kansas, or Wyoming, or Montana, or whatever it is, it kind of loses its environment and its appeal, as far as I’m concerned. The American people need to know what’s going on, that it’s not just another rally.”

Sen. Ted Cruz, Texas Republican said that “The State of the Union is an enormous platform for the president to speak directly to the American people,” adding that Pelosi “doesn’t want people focusing on the substance of this issue. She wants their information to come from the mainstream media, rather than to come directly from the president.”

“Nancy Pelosi is terrified, number one, of her extreme left-wing base,” Cruz said. “She is captive of them. And number two: The position of congressional Democrats in this shutdown is objectively unreasonable. In 2013, Chuck Schumer and every Senate Democrat voted in favor of 350 miles of border wall. They have right now shut down the government down to stop 234 miles of border wall. I don’t know how you explain why you voted for 350 miles, but you shut the government down to stop 234 miles. That is incoherent.”