In a now-deleted tweet, New York Times Pulitzer Prize winner Nikole Hannah-Jones wrote: “There is a basic difference between being politically black and racially black. I am not defending anyone, but we all know this and should stop pretending that we don’t.” 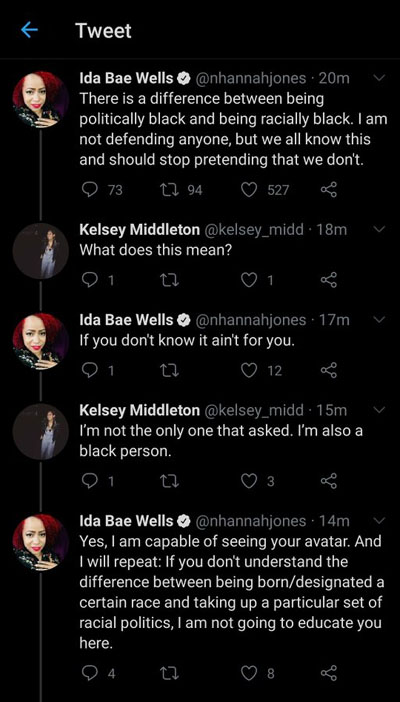 Asked by another Twitter user “What does this mean?”, Hannah-Jones, who tweets under the handle Ida Bae Wells, replied, “If you don’t know it ain’t for you.”

Despite insisting that she was not defending “anyone,” Hannah-Jones made her comments shortly after presumptive Democratic Party presidential nominee Joe Biden suggested in an exchange with radio host Charlamagne Tha God that only blacks who vote Democrat are truly black.

“I’ll tell you, if you have a problem figuring out whether you’re for me or for Trump, then you ain’t black,” said Biden.

Writing for The Federalist, David Marcus noted: “Setting aside the weird rhetorical pirouette she (Hannah-Jones) makes in the response, basically saying ‘you not understanding my point proves my point,’ let’s look at what she has to say about Biden. She is NOT defending him. That is made clear. But then she goes on to say that what he said about black voters is actually true. So, then, why isn’t she defending him? It’s because she is allowed to say it but old white Joe isn’t.”

The Federalist senior editor Mollie Hemingway tweeted: “Pulitzer Prize winner appears to support how whites are allowed more freedom of thought than blacks. If you’re white, you’re allowed to be liberal or conservative. If you’re black, you will be marginalized and demeaned unless you think the way the powers that be say you must.”

“What it demonstrates is that black Democrats will tolerate any insult as long as it’s coming from the correct political source,” said Woodson, head of the Woodson Center.

Hannah-Jones won the Pulitzer Prize for commentary earlier this month for her essay introducing the 1619 Project, which asserts that the American Revolution was fought to preserve slavery. It was immediately discredited by historians of all political stripes.

Hannah-Jones later said she deleted the tweet because it wasn’t “clearly written.”

“So, the point I was trying to make, though apparently not well, is being born black does not necessitate being politically black. And it’s strange that people are appearing to argue there’s no such thing as black politics when there are entire courses on it,” she said.

The underlying premise of Biden’s remarks, that blacks owe some perpetual allegiance to the Party of Jefferson and Jackson is in fact actually offensive to many people, especially black conservatives who do not feel themselves constrained by Hannah-Jones’ concept of political blackness. But that’s not Joe Biden’s problem.

Joe Biden’s problem is that to progressives who are trepidatious of him, many who are well-educated white voters think this kind of gaffe is hard to forgive. His campaign will to try to see that it doesn’t happen again, but if they can’t control it in the basement, what hope do they have if he ever leaves and gets back on the campaign trail?