Officials in public schools in Maine, Maryland and New Jersey are rallying behind transgender students.

In Maine, Portland public schools will determine this week whether to adopt a policy in which the district will “abide by the wishes of the student with regard to their gender identity and gender expression while at school,” even if their “wishes” are at odds with their parents, the Portland Press Herald reported. 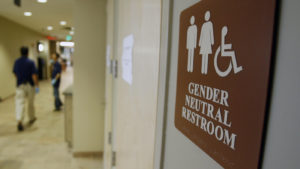 In Maryland, a new policy set to take hold in Frederick County schools mandates that bathrooms and locker rooms “should be used according to gender identity and provides alternatives for students uncomfortable for any reason,” The Washington Post reported.

In New Jersey, transgender high school athletes are now able to compete in sports without a doctor’s note or official document that proves their gender identity, according to a report by HS Live.

Portland’s policy will also require school staff to be trained regarding “transgender etiquette” and will require that staff use a student’s preferred name and pronoun as opposed to their given name or birth pronoun. The policy “will address those who are male, female, both, neither, or some other gender,” the Portland Press Herald report said.

“It’s a good official first step … I feel like I can be myself here,” 18-year-old transgender student Alexander Fitzgerald, who worked with district officials and the Maine Human Rights Commission to draft the policy, told the Press Herald.

The Frederick County policy “is one of the most comprehensive transgender student policies in the country,” Jabari Lyles, executive director of GLSEN Maryland, which advocates for LGBT students on issues of education, told the Washington Post.

Critics of the policy have also come forward, including one who filed a lawsuit on behalf of a mother and her 15-year-old daughter, asserting the girl’s rights to bodily privacy and saying the teen fears for her safety and feels humiliated to undress in front of “the opposite sex.”

“One of our problems with this policy is it appears to be concerned only with the rights and affirmations of transgender students,” said Cindy Rose, speaking for the Republican Women of Frederick County. “Will there be a policy protecting the band geek, the math nerd and the other children who have felt unwelcome and bullied for decades? Will they get a similar carve-out?”

Rose described the issue as a question of privacy rights and “whether boys should be able to watch girls undress and vice versa.”

In New Jersey, the executive committee of the State Interscholastic Athletic Association (NJSIAA) approved a new policy last week whereby student-athletes who want to change gender would simply have to notify the school’s administration.

“We wanted to make a policy that is clear and concise,” NJSIAA attorney Steve Goodell said, “so that anybody reading it would understand what the rights and applications are.”

“The last year or so we’ve gotten some requests from the transgender community to make some tweaks,” Goodell said. “They didn’t like the idea of someone having to prove the transgender status. They really made a convincing case that this is not something the students are making up to try to game the system.”

Under the policy, student-athletes could play one gender sport one season and another the following season, but that is unlikely, according to Goodell.

“That’s a life decision,” he said of someone changing gender identities. “That’s not just a flippant decision they might make because they’re better in one sport than another. It’s not going to be made lightly. I think it’s going to be very rare that a student changes (gender identity) in the middle of the (school) year. If they do, they do, but that’s a life decision with a lot of (other) consequences.”

Schools can appeal to the NJSIAA if they believe the participation of a transgender student in a sport would adversely affect competition, safety or both, the HS Live report said.