The decisions by the NCAA and Atlantic Coast Conference (ACC) to pull their sports championships out of North Carolina over House Bill 2 (HB2) amounts to “sexual bullying” by “moral hypocrites”, influential supporters of the bill said.

North Carolina Lt. Gov. Dan Forest said in a statement on Sept. 15 that the “NCAA’s action sends a message to every female athlete and female fan attending their events that their privacy and security in a bathroom, shower or locker room isn’t worth the price of a ticket to a ballgame.” 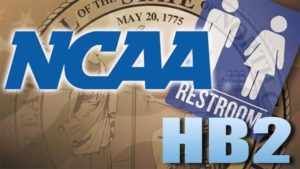 He continued: “The line has now been drawn in the sand, first by Hollywood, now by the NBA and NCAA, either accept their ‘progressive sexual agenda’ or pay the price. North Carolina will not play that game. We value our women too much to put a price tag on their heads.”

The NBA in July announced it was moving its 2017 All-Star Game from Charlotte.

HB2, which was passed in March, directs all public schools, government agencies and public college campuses to require that multiple-occupancy bathrooms and changing facilities be designated for use according to the “biological sex” stated on a person’s birth certificate.

North Carolina-based evangelist Franklin Graham, in a letter to ACC commissioner John D. Swofford, a copy of which was sent to the presidents of its 15 member schools, called on Swofford not to make “political pawns of student-athletes.”

He also told Swofford that the ACC, NCAA, and companies and organizations boycotting North Carolina because of HB2 are guilty of “profound hypocrisy” for “making calculated business decisions disguised as moral outrage.”

Graham pointed out that Dr. Pepper (and its parent company), the corporate sponsor of the ACC football championship that had been scheduled for December in Charlotte, sells its products in countries where homosexuality is illegal.

Graham, in a Facebook post on Sept. 15, said North Carolina was being “bullied” by the ACC, the NCAA “and some of corporate America who are influenced by LGBT activists.”

“Our legislators are being forced to consider repealing HB2 and you, your children, and your grandchildren will be at risk to sexual predators and perverts,” Graham wrote in the post.

The ACLU of North Carolina’s legal director, Chris Brook, said it was “beyond shameful that North Carolina’s leaders continue to double down on their support” of a “discriminatory law that is wreaking so much havoc on our state’s people, reputation and economy.”

In his letter to Swofford, Graham, a national leader of conservative Christians, said he believed that he reflected “the views of millions who would rather preserve gender-specific bathrooms – a mainstay for generations – than to attend a football or basketball game in my state to determine the champion of a conference governed by politically-correct, morally hypocritical academics.”