Bidenflation gets worse by the day as gasoline prices hit record highs every day this week. 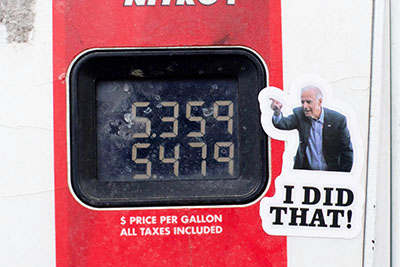 And Team Biden’s attempt to put the blame on Vladimir Putin is not flying.

“While the Biden Administration and Members of Congress fault the domestic oil and gas industry for sitting idle on over 9,000 drilling permits and millions of acres in ‘inactive leases’, NMFS’s permitting delays represent one example of the Administration’s de facto ban on new drilling – impeding domestic oil and gas investment, exploration, and production,” the senators wrote.

The senators attributed the delays to “three administration-made and admitted mistakes” that trace back to mathematical errors in calculating the number of endangered species in the Gulf of Mexico in a 2021 final rule governing offshore oil and gas exploration.

“It is unacceptable that agency miscalculations have restricted access to safe, secure, and reliable domestic oil and gas production through substantial, unnecessary, and arbitrary permitting delays,” they added.

Steve Milloy, founder of JunkScience.com, told Fox Business that Biden is to blame for “all lack of production. He has scared away investment.” Milloy suggested that Biden will find “any excuse to not drill. They even tried to use the social cost of carbon decision to stop leasing.”

In his first week after being installed in the White House, Joe Biden signed an executive order temporarily suspending new oil and gas leases on federal lands. The administration resumed the new leasing last month following court challenges against the ban. But Team Biden is appealing a ruling in which Judge James Cain, a Trump appointee, struck down the ban.