An tireless President Donald Trump is living his dream and has revived the U.S. economy “faster than anyone imagined possible,” according to a new book. 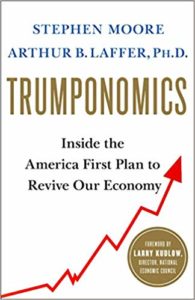 “I can tell you after a few months on the job, this man is indefatigable. Donald Trump doesn’t stop. He barely sleeps. It’s almost impossible to keep up with him. He is truly obsessed with restoring American greatness,” National Economic Council Chairman Larry Kudlow wrote in the forward for “Trumponomics, Inside the America First Plan to Get Our Economy Back on Track”.

“And it has happened faster than anyone imagined possible.”

The book by Trump economic advisers Stephen Moore (a WorldTribune columnist) and Arthur B. Laffer is due out on Oct. 30.

The authors gave Trump adviser Steve Bannon credit for directing the world view that Trumponomics represents. “Trump is a non-politician who was promising a paradigm shift,” Bannon told the authors.

“That’s the understatement of this still-young century. Trump didn’t run as a Milton Friedman-Reagan free marketeer. He is not a libertarian – far from it. He also didn’t run as a ‘kinder and gentler’ Bush neocon. Trump upended two decades of stale Republican dogma with a freshly minted populist agenda,” Moore and Laffer wrote.

The authors revealed that Trumponomics has 10 key points: