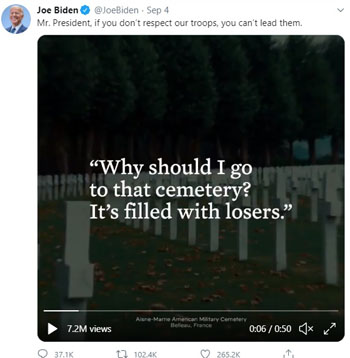 Citing a double standard by Twitter and Facebook, the legal counsel for the Trump-Pence campaign called for a “cease and desist” on the digital ad.

“On behalf of Donald J. Trump for President, Inc., President Trump’s principal campaign committee, this letter notifies you that Biden for President (the “Biden Campaign”) produced and caused to be posted on Joe Biden’s Twitter feed a digital ad that contains intentionally false and misleading statements that cannot be verified when it alleges that President Trump made derogatory comments towards fallen American military heroes.”

The article, quoting anonymous sources, said that Trump refused to travel to an American cemetery in France because it was “filled with losers.”

The Biden campaign quickly had a digital ad up quoting the article. In a tweet promoting the ad, Biden said, “Mr. President, if you don’t respect our troops, you can’t lead them.”

“Trump and several surrogates, on the record, immediately denied hearing anything like what the Atlantic reported. But the ad continues to show up on Facebook and Twitter, and Biden has repeated the magazine’s claims,” Washington Examiner columnist Paul Bedard noted.

The six-page letter from the Trump-Pence campaign, which was provided to Bedard, is demanding that Biden stop repeating the article and for the social media platforms to black out the ad.

“Twitter claims that it has a role in slowing the spread of misinformation,” wrote Ellis. “Facebook has similar community standards. Both Twitter and Facebook have used their policies to remove or flag tweets and postings by President Trump. Now, Twitter and Facebook — if they are truly trying to be fair arbiters of factually accurate statements — will be obligated to remove your False and Misleading Ad, which is based solely on cites to anonymous sources.”

These are my real words about our GREAT HEROES, not made up lies by the enemy. THANK YOU and God Bless You All! pic.twitter.com/oFgQXzpJHU