President Trump: ‘Where’s the apologies to me and others, Jim?’ 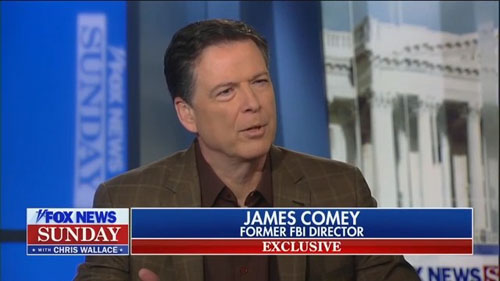 In an interview on “Fox News Sunday”, Comey admitted “I was wrong. I was overconfident in the procedures the FBI and Justice had built over 20 years. I thought they were robust enough.”

“There was real sloppiness,” Comey added.

Trump tweeted on Monday: “So now Comey’s admitting he was wrong. Wow, but he’s only doing so because he got caught red handed. He was actually caught a long time ago. So what are the consequences for his unlawful conduct. Could it be years in jail? Where are the apologies to me and others, Jim?”

Outrage from conservative critics of the corporate media and the Democratic Party establishment continued to spread throughout the weekend following the release of the Horowitz report.

After the report was released, Fox News host Tucker Carlson said it had “provided even more information about what actually happened and confirmation of the fact that’s been pretty obvious for a while. Former Obama CIA chief John Brennan is a liar. Not only that, he lied to Congress. In the spring of 2017, Brennan told the House Intel Committee that the Steele dossier played no role in the creation of intelligence community assessment on Russian interference. It was presented to both President Obama and President-elect Trump. And Brennan was not vague about this. He said unequivocally on camera, the dossier was totally irrelevant. That was a complete lie. The IG report proves it. A lie.”

Carlson continued: “The Steele dossier was in fact a major element of the intelligence assessment and Brennan, in particular, found it very important. In other words, John Brennan, not a close call here, perjured himself on camera in front of the world. But here’s the striking thing. John Brennan is not facing perjury charges. In fact, he’s still tweeting himself righteously and making smug appearances on CNN, which I think, check my memory for a second, pays him as a contributor.

“Meanwhile, former Trump adviser Roger Stone is looking to spend the rest of his life behind bars. His crime, lying about emails totally irrelevant to anything, literally irrelevant. So what sets John Brennan, former CIA director, apart from Roger Stone, a professional prankster, really, it’s obvious. One supports the establishment in Washington, and the other made fun of it.”

Other analysts noted that some deep staters, including a former CIA official, and many in the major media continue to lie about the Russia investigation and the Steele dossier even after Horowitz’s report was released.

The Federalist’s Mollie Hemingway tweeted: “It’s not just that these “journalists” were blatantly lying. It’s how smug they are while lying and how much they mock those who pushed back on their false and republic-threatening propaganda. STUNNING to watch. There must be accountability.”

Former CIA official Steve L. Hall tweeted in response to Hemingway:
“Which part of the Steele dossier is false?”

Former CIA ops officer Bryan Dean Wright tweeted in response to Hall: “Per the IG report, the CIA dismissed the Steele dossier as “internet rumor.” That was in 2016.”

Libertarian congressional candidate Chris Manning tweeted in response to Hall: “Where to begin
1) Page never met with Sechin and Devyekin
2) Page was not coordinating the release of emails through Manafort
3) Alpha Bank was not sending secret encoded messages to Trump Tower
4) Page was not offered a 19% stake in Gazprom with $10B
5) Page did not author or suggest the changes to the Republican platform
6) Cohen did not travel to Prague
7) The pee tape was just BS some people said while in a bar drinking beers
Etc etc etc”

One Twitter poster answered Hall’s question of which part of the Steele dossier is false: “Mostly just the part with letters, numbers, symbols, punctuation, and spaces.”