President Trump warns Georgia’s Raffensperger: ‘They are shredding ballots’ …. ‘We’re not giving Dominion a pass on the record’ 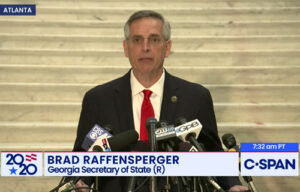 Trump: Sure, but I mean, are they counted or did you just hold them back because they, you know, in other words, how many provisional ballots do you have in the state?

Raffensperger: We’ll get you that number.

Trump: Because most of them are made out to the name Trump. Because these are people that were scammed when they came in. And we have thousands of people that have testified or that want to testify when they came in they were probably going to vote on November 3. And they were told I’m sorry, you’ve already been voted for, you’ve already voted. The women, men started screaming, No. I proudly voted til November 3. They said, I’m sorry, but you’ve already been voted for and you have a ballot and these people are beside themselves. So they went out and they filled in a provisional ballot, putting the name Trump on it. …

So we don’t need that. I’m not looking to shake up the whole world. We won Georgia easily. We won it by hundreds of thousands of votes. But if you go by basic simple numbers, we won it easily, easily. So we’re not giving Dominion a pass on the record. We just, we don’t need Dominion, because we have so many other votes that we don’t need to prove it any more than we already have. …

Germany: Well, that’s not the case sir. There are things that you guys are entitled to get. And there’s things that under the law, we are not allowed to give out.

Trump: Well, you have to. Well, under the law you’re not allowed to give faulty election results, OK? You’re not allowed to do that. And that’s what you done. This is a faulty election result. And honestly, this should go very fast. You should meet tomorrow because you have a big election coming up and because of what you’ve done to the president — you know, the people of Georgia know that this was a scam. And because of what you’ve done to the president, a lot of people aren’t going out to vote and a lot of Republicans are going to vote negative because they hate what you did to the president. Okay? They hate it. …

Meadows: Mr. President. This is Mark. It sounds like we’ve got two different sides agreeing that we can look at these areas and I assume that we can do that within the next 24 to 48 hours to go ahead and get that reconciled so that we can look at the two claims and making sure that we get the access to the secretary of state’s data to either validate or invalidate the claims that have been made. Is that correct?

Germany: I don’t think we can give access to data that’s protected by law. But we can sit down with them and say —

Trump: Well why don’t my lawyers show you where you got the information. It will show the secretary of state, and you don’t even have to look at any names. We don’t want names. We don’t care. But we got that information from you. And Stacey Abrams is laughing about you know she’s going around saying these guys are dumber than a rock. What she’s done to this party is unbelievable, I tell ya. And I only ran against her once. And that was with a guy named Brian Kemp and I beat her. And if I didn’t run, Brian wouldn’t have had even a shot, either in the general or in the primary. He was dead, dead as a doornail. He never thought he had a shot at either one of them. What a schmuck I was. But that’s the way it is. That’s the way it is. I would like you … for the attorneys … I’d like you to perhaps meet with Ryan ideally tomorrow, because I think we should come to a resolution of this before the election. Otherwise you’re going to have people just not voting. They don’t want to vote. They hate the state, they hate the governor and they hate the secretary of state. I will tell you that right now. … So, look, can you get together tomorrow? And Brad. We just want the truth. It’s simple. And everyone’s going to look very good if the truth comes out. It’s OK. It takes a little while but let the truth come out. And the real truth is I won by 400,000 votes. At least. That’s the real truth. But we don’t need 400,000. We need less than 2,000 votes. And are you guys able to meet tomorrow Ryan?

Germany: Um, I’ll get with Chris, the lawyer representing us and the case, and see when he can get together with Kurt.

Raffensperger: Ryan will be in touch with the other attorney on this call, Mr. Meadows. Thank you President Trump for your time.

President Trump warns Georgia’s Raffensperger: ‘They are shredding ballots’ …. ‘We’re not giving Dominion a pass on the record’

President Trump warns Georgia’s Raffensperger: ‘They are shredding ballots’ …. ‘We’re not giving Dominion a pass on the record’ added by World Tribune on January 4, 2021
View all posts by World Tribune →