Russian citizens are under the impression that the United States had “goaded” Vladimir Putin into invading Ukraine, Russian-American journalist and broadcaster Vladimir Pozner said. 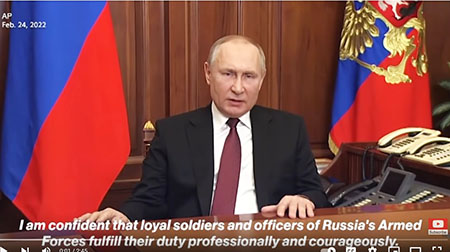 “Russians know what Western leaders are saying. Their statements are widely featured in the media. The general feeling is that the West in fact wants Russia to attack Ukraine because that would be to the West’s advantage, it is goading Russia to attack,” Pozner told CNN.

A new CNN poll revealed that 50 percent of Russian participants said they thought use of force would be justified to prevent Ukraine from joining NATO, while 25 percent said it would be wrong and the remainder said they were unsure.

The poll found 43 percent of Russians said it would be wrong for Moscow to use military force to “reunite Russia and Ukraine” and 65 percent said they expected a peaceful end to the tensions between the two countries.

Nearly 2 in 3 Russians in the survey said they considered themselves and Ukrainians to be “one people,” while around the same percentage of Ukrainians disagreed with this characterization.

In a Sept. 27, 2018 address to Yale’s Program in Russian, East European and Eurasian Studies, Pozner spoke on the theme: ‘How the United States created Vladimir Putin.’

Pozner detailed the timeline in post-USSR U.S.-Russia relations from the Boris Yeltsin era the present. For unexplained reasons, he explained first hand sources, beginning in 1996 the United States government repeatedly broke its promise to Yeltsin and later Putin that NATO would not expand membership and military installations to include former Warsaw Pact members.

Meanwhile, the U.S corporate media, with few exceptions, has been speaking with one voice on the Russia-Ukraine conflict just as it did with its coverage of the Coronavirus which included banning reports on non-vaccine treatments for Covid-19 and adverse effects of taking the vaccine.

One contrarian perspective came from retired Col. Douglas Macgegor in a Fox News interview in which he was rebuked by Stuart Varney on Fox Business:

Macgregor: But the question is, what is it that Zelensky going to do? The Russians have made it very clear what they want is a neutral Ukraine. This could’ve ended days ago if he accepted that. And then they can adjust the borders, but the eastern part of Ukraine is firmly in Russian hands, but again, the Russians are not seizing territory. They’re destroying Ukrainian forces. That’s their focus.

Varney: Colonel, it sounds like you don’t approve of Zelensky’s stand.

Macgregor: Oh, I think Zelensky is a puppet. And he is putting huge numbers of his own population at unnecessary risk, and quite frankly, most of what comes out of Ukraine is debunked as lies within 24 to 48 hours. The notions of taking and retaking airfields, all of this is nonsense. It hasn’t happened.

Varney: He’s not a hero? He’s standing up for himself and his own people. You don’t think he’s a hero?

Macgregor: No, I do not. I don’t see anything heroic about the man. And I think the most heroic thing that he can do right now is to come to terms with reality. Neutralize Ukraine. This is not a bad thing. A neutral Ukraine would be good for us as well as for Russia. It would create the buffer that, frankly, both sides want. But he’s, I think, being told to hang on and try to drag this out, which is tragic for the people that have to live through this.

Readers may wonder why I am not accepting the NATO narrative on the Russo-Ukraine War.

Let us review, shall we?

If you dare question global warming (recently renamed climate change), they say you are for pollution and corporate greed.

If you dare question Obamacare, they say you must want people to die.

If you dare question how Biden got so many mail-in votes, they say you are an insurrectionist.

If you dare question BLM, they say you are a racist.

And if you dare question the validity of masks, vax and social distancing, they say you want people to die again this time from covid.

The pattern is clear. Any time you question them, they call you names instead of answering the question.

Free Press Foundation Advisory Board member Larry Ward noted in a Facebook post: “Shadow banning on Ukraine/Russia is in full effect…When do we get to see Facebook warnings about War Misinformation — See details at the Ministry of Truth. We are at war with Eurasia — We’ve always been at war with Eurasia. [quoting George Orwell’s 1984]”