Our ruling elites would like you to believe that the explosion of cultural Marxist agitprop that has dominated mainstream media in the wake of the death of a black man in police custody in Minneapolis reflects a spontaneous grassroots response to “oppression” occurring in America today.

It is of course nothing of the sort. Highly placed forces are deliberately promoting crisis in order to enact profound social change over a once-free people. The media are a crucial weapon in this effort. 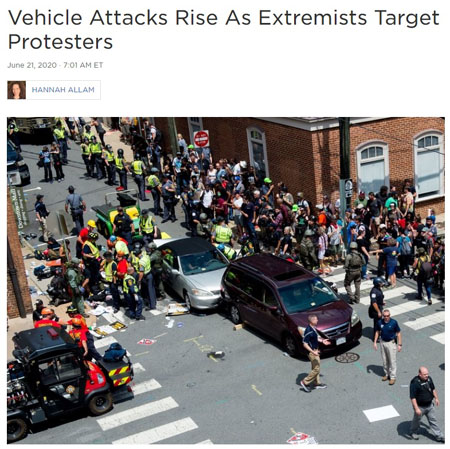 “The photo, chosen by editors, does not appear to be an example of the assaults described in the story, and has been replaced,” NPR later stated in an editorial note added to the article. “Police have not charged the driver, but have charged two of the protesters involved in that incident. Authorities continue to investigate.”

Make no mistake. NPR was caught faking the news, and was forced to backtrack. If the video had not been widely seen, no such hint of a retraction would have been forthcoming.

Allam, author of the atrocious article, is tied into an entire network dedicated to publishing biased “journalism” on behalf of a loaded progressive social agenda. She serves on the board of directors for the International Women’s Media Foundation (IWMF), a leftist feminist organization co-founded by longtime PBS media star Judy Woodruff in 1990. IWMF financially sponsors progressive “reporting” that appears in leading publications across the nation. It in turn is backed by a dizzying array of moneyed companies, philanthropies and individuals.

IWMF received $1.5 million from the Bill & Melinda Gates Foundation in 2002 “to support the Global Health Media project in Africa.” That is not the only seven-figure check it’s cashed. CBS News gave the organization a cool $1 million in 2018 to “grow its global pipeline of female journalists and foster more female leadership in newsrooms worldwide.”

Yes, you the American taxpayer are supporting NPR and PBS only to have them turn around and give money to a progressive media organization.

In 2019, The Washington Post announced it had entered into a special “Press Freedom Partnership” with IWMF.

Social media goliath Facebook is also a donor, and its Director of Strategic Communications Anne Kornblut sits on the IWMF board of directors.

My, what an interesting collection of power players we have working together here. Now let’s take a look at what they are supporting.

IWMF dutifully paid obeisance to Black Lives Matter following the death of George Floyd. “We are deeply disturbed by the systemic racism, white supremacy and police brutality perpetuated in the U.S., and condemn these heinous acts unequivocally,” the organization declared in an official statement.

In fact, the group has been heavily invested in the BLM message for some time. It bestowed its “Gwen Ifill Award,” part of the 2019 IWMF Courage in Journalism Awards, upon Nikole Hannah-Jones, the leading figure behind The New York Times’ racially inflammatory 1619 Project.

“Nikole exemplifies that a better, deeper, fairer press relies on a diversity of perspectives,” said Elisa Lees Muñoz, the IWMF’s Executive Director, in announcing the honor. “It’s a privilege for the IWMF to honor her profound work covering racial injustice, and the inspiration she’s provided to young journalists following in her footsteps.”

The Times’ 1619 Project has been roundly criticized for its breathtakingly inaccurate historical accounts. It was revealed this past week that Hannah-Jones wrote a letter to the editor of the University of Notre Dame’s The Observer student newspaper in 1995 stating that “the white race is the biggest murderer, rapist, pillager, and thief of the modern world.”

Sponsors for the 2019 IWMF Courage in Journalism Awards that honored this hate-filled radical included the U.S. Chamber of Commerce and the Wall Street Journal.

Gee, how “conservative” of them.

Oh, and did I mention that Fox News is also a financial supporter of IWMF?

Playing up white guilt is very much a part of IWMF’s current agenda. A tweet promoting a CNN.com article by Bryan Monroe, another IWMF board member who is also a professor at Temple University, features submissive whites bending the knee in the name of racial repentance:

"White people, this one is on you. You are in the positions of power. You are the ones who can be the change." @BryanKMonroe, IWMF Co-Chair, calls on white people to step up in the fight against racism. https://t.co/ebKM7Y6tg0

In the article, Monroe lays the burden of racial wrongdoing on all white people:

“White people, this one is on y’all.

“Between the coronavirus pandemic and the lethal police violence, this has been a rough few weeks for Black America. It has set in stark relief how little of this is within our control. We, mostly, are not the cops on the street. We, mostly, are not the CEOs in the board rooms. We, mostly, aren’t the voters electing the prosecutors and judges. We’re not sitting at the dinner tables with the mildly racist cousins and uncles and in-laws who are snickered at or just tolerated.

“This week has shown how much of what has been happening – and how many of the things that must change – are on the white majority. You have the real power. You are in the positions of authority. If this has really affected you at your core, you can actually change white culture. From the inside. We can’t.”

What makes this screed especially hilarious, of course, is that Monroe is very much “in the board room” at the extremely well-connected IWMF.

IWMF’s funding of socially destructive progressive “journalism” is too vast to detail in full. In keeping with the Cultural Marxist modus operandi, the rot of sexual and moral depravity is well represented. A June 15 tweet by the organization hashtagged “BadassFemaleJournos” highlighting “stories from our network” featured a pro-sex worker article that appeared in May in The New Yorker. An excerpt from this sympathetic portrait of prostitutes suffering an economic slowdown during the coronavirus upheaval:

Sex is unlike any other commodity. It is, for some people, tied to emotional beliefs about morality and pleasure and power. It is, for many others, tied to those same things, but it can be transactional and unsentimental, too — a service. Despite many parts of the sex business becoming legal, its laborers still see themselves either glamorized in popular culture as high-earning hustlers or portrayed as victims of trauma and manipulation. Political and social stigmas limit the recognition of their basic rights as workers. “People don’t realize that most labor is exploitative under capitalism,” Meagan, an organizer and former escort and stripper in Washington State, told me. “Looking at sex work from a puritanical view is deeply ingrained in society.”

IWMF is staunchly pro-abortion and directly funds abortion propaganda posing as informative “journalism.” Many of its abortion articles take a globalist focus, promoting the fight to roll back restrictions in nations that have a traditional cultural opposition to the murder of the unborn. IWMF displays a notable anti-Catholic tone in its “reporting” on abortion in Mexico and South America.

“In Argentina, where society and politics have long been influenced by heavy-handed Catholicism, women can face up to four years in prison for seeking an illegal abortion.”

The author of the piece states that it was made possible “with the support of” IWMF.

Another article sponsored by IWMF appeared at Rewire.News, a pro-abortion “news” site. It attacks Catholics, and religion in general, in particularly globalist style:

These moves come amid a rising tide of protests across Latin America demanding the legalization of abortion and an end to religious attitudes that have kept women from living full lives.

On September 28, Sonia Gutiérrez Leon… was among hundreds of people who marched through Guadalajara [Mexico] as part of the so-called Green Wave of abortion rights protests that began in Argentina. Gutiérrez Leon sees Catholic hospitals as part of the oppressive religious dogma that this movement is up against. So she was discouraged to hear about U.S.-based Christus expanding in Mexico.

“I think these companies can bring us other, more positive things, like technology and invention and other things that can come out of their development, and not these religious dogmas,” she said. She went on to tick off a list of U.S. exports she would appreciate: culture, American football, ballet teachers. Anything but more Catholic dogma. “If Mexico has anything, it’s churches,” she said.

Isn’t it interesting how American cultural imperialism is OK when it is toppling religious belief in traditionally Christian nations?

“With appropriate support and information, however, experts say that self-managed medication abortions are extremely safe. And for some of the women who undergo them, the process can be a transformative experience that spurs them to activism.”

IWMF also actively supports the international transgender movement and the gender warping of young children. A 2017 article it sponsored profiled a 6-year-old “transgender” child in Chile.

Unsurprisingly, IWMF is also pro-massive immigration into the nations of the West. To give just one of several examples, IWMF sponsored an October 2019 article on “[t]he harrowing stories of six asylum seekers who now call Chicago home” that appeared in a publication called Borderless Magazine, which IWMF also financially backs. Borderless says it is:

“[A] nonprofit news outlet that is reimagining immigration journalism for a more just and equitable future.

“We humanize stories of immigration by shining light on the diversity, resilience and resistance of people impacted by immigration policies today. We report and publish stories in our online publication, we work with immigrants and their allies to tell their own stories, and we train journalists to more ethically report on immigration issues.”

The culturally corrosive “journalism” sponsored by the International Women’s Media Foundation shines more light on an intimately connected elitist network that is deliberately inciting and exacerbating social antagonism in order to advance its own higher aims.

Bill Gates, Bank of America, George Stephanopoulos, the U.S. Chamber of Commerce, PBS and The Wall Street Journal all seamlessly co-exist within this toxic circle. Everything that is happening now has long been planned.