Whistleblowers are coming forward with “so much evidence, I feel like it’s coming in through a fire hose,” Sidney Powell, who recently joined the Trump campaign’s legal team, said on Sunday.

“We’re getting ready to overturn election results in multiple states,” Powell said in a Fox Business interview, saying that she has enough evidence of election fraud to launch a widespread criminal investigation. “I don’t make comments without having the evidence to back it up.” 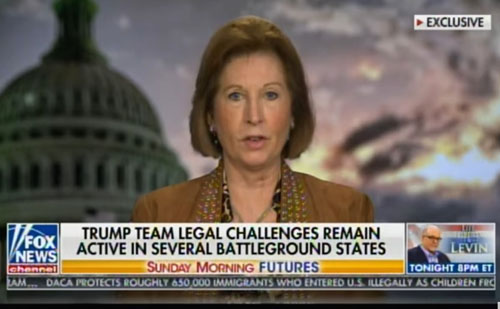 A whistleblower has come forward to say that 2020 election software was designed to “rig elections,” saying that “he saw it happen in other countries,” Powell said.

“They can stick a thumb drive in the [voting] machine, they can upload software to it even from the Internet … from Germany or Venezuela even,” she said, adding that operations “can watch votes in real-time” and “can shift votes in real-time,” or alleged bad actors can “remote access anything.”

“We’ve identified mathematically the exact algorithm they’ve used—and planned to use from the beginning” that allegedly switched votes to Biden, Powell said.

Powell also pointed to a 2019 investigation from Democrat Sens. Amy Klobuchar, Elizabeth Warren, and Ron Wyden into Dominion Voting Systems, Election Systems & Software, and Hart InterCivic. The senators had expressed concerns about the security of the voting systems.

“(W)e have concerns about the spread and effect of private equity investment in many sectors of the economy, including the election technology industry — an integral part of our nation’s democratic process,” wrote the lawmakers in their letters to the voting systems companies about a year ago. “These problems threaten the integrity of our elections and demonstrate the importance of election systems that are strong, durable, and not vulnerable to attack.”

“We are particularly concerned,” the Democrats continued, “that secretive and ‘trouble-plagued companies,’ owned by private equity firms and responsible for manufacturing and maintaining voting machines and other election administration equipment, ‘have long skimped on security in favor of convenience,’ leaving voting systems across the country ‘prone to security problems.’ ”

Three voters have filed a federal lawsuit seeking to exclude Nov. 3 election results in three of the state’s counties that helped push Biden ahead of Trump, The Epoch Times reported.

The lawsuit seeks to invalidate over 792,000 votes cast across the state.

The civil action, filed on Thursday, alleges that there is “sufficient evidence that illegal votes were counted” in Milwaukee, Dane, and Menominee counties “to change or place in doubt the results” of the presidential election in the counties. The voters asked the court to declare that the counties’ results “must be invalidated” and to block the counties from certifying their results.

Biden holds a lead of about 20,500 votes. The Trump campaign has signaled it will request a recount.

The lawsuit stated: “Because illegal votes dilute legal votes, the evidence establishes, and will establish, that the rights of voters have been violated by vote-dilution disenfranchisement. Consequently, the presidential election results from the counties identified should not be included in certified and reported totals for presidential electors from this state.”

In an interview with independent journalist Michelle Malkin, Faith Education Commerce United founder Joe Oltman revealed how he infiltrated Antifa, and how during a conversation with Antifa members he discovered “Eric from Dominion”, who worked for Dominion Voting Systems, saying he personally “made sure” Trump would not win on Nov. 3.

Oltman explained that “Eric” was telling the Antifa members they needed to “keep up the pressure.” When Oltman asked, “Who’s Eric?” someone answered, “Eric, he’s the Dominion guy.” Oltman said that as the conversation continued, someone asked, “What are we gonna do if F*cking Trump wins?” Oltman paraphrased how Eric (the Dominion guy) responded, “Don’t worry about the election, Trump’s not gonna win. I made f*cking sure of that!”

Oltman said he began digging into Eric Coomer, trying to find anything he could about him. Oltman said he finally hit gold when he was able to (legally) access what he claims is Dominion VP, Eric Coomer’s Facebook page. What he found was stunning. Joe Oltman said he never saw such hate and vitriol coming from someone who has a Ph.D. in Nuclear Physics. Oltman explained to Malkin that Coomer actually re-posted the Antifa manifesto to President Trump on his Facebook page.