Poll raises questions about how tolerant liberals actually are

Turns out liberals, quick to whip up a post and an angry emoticon when it comes to pointing out the alleged intolerance and bigotry of conservatives, are a long way from the altruism they espouse.

According to a new poll by the nonpartisan Public Religion Research Institute (PRRI), Democratic voters are almost three times as likely to have “blocked, unfriended, or stopped following someone on social media” after Donald Trump’s election victory. 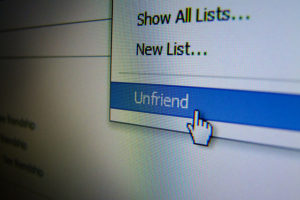 The poll, released on Dec. 26, found 24 percent of Democrats “distanced themselves from people on social media because of political postings. Nine percent of both Republicans and independents reported doing the same to those in social media circles.”

Among liberals surveyed in the PRRI study, 28 percent said they removed someone from their social media circle because of the content that person posted, compared with 8 percent of conservatives.

For moderates, 11 percent said they blocked, unfriended or unfollowed someone due to what that person posted online.

Women were “twice as likely as men to report removing people from their online social circle because of the political views they expressed online,” 18 percent to 9 percent, according to the study conducted by Daniel Cox and Robert P. Jones.

Three in 10 Democratic women said they removed someone from a social media platform due to a political opinion shared. This compares to just 14 percent of Democratic men who did the same.

Republican men and women were about equal on this front, with 10 percent of GOP men saying they blocked, unfollowed, or unfriended someone on social media because of political postings and 8 percent of Republican women following suit.

Meanwhile, 5 percent of those polled said they would alter plans in order to spend less time with select members of their family because of their political views.

This, too, showed a partisan divide: 10 percent of Democrats said they planned to avoid certain family members, and 2 percent of Republicans said they would do likewise.