A little-noticed poll that was conducted in 2013 revealed as many as 2 million illegal aliens are registered to vote in the United States.

The National Hispanic Survey, conducted in June 2013 by McLaughlin and Associate, included a voter profile of an 800-person sample of adult Latinos in the U.S. 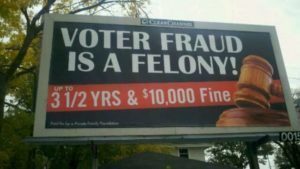 A sub-sample of 472 of the 800 Latinos living here but not born in the U.S. were asked questions about citizenship. Of those, 264 said they were non-citizens, and of those, 13 percent said they were registered to vote, according to a report by The Washington Times on Feb. 15.

A 1996 federal law, and other statues, makes it a felony for non-citizens to register. The poll did not ask if they voted.

“It is a fact and you will not deny it, that there are massive numbers of non-citizens in this country who are registered to vote,” White House adviser Stephen Miller told ABC News. “That is a scandal. We should stop the presses.”

President Donald Trump said Vice President Mike Pence will head up a task force on voter fraud. Trump said he wants the investigation to focus on inaccurate voter registration rolls, which are maintained by the states and the District of Columbia.

Accounting for the margin of error based on the sample size of non-citizens, Agresti calculated that the number of illegally registered Hispanics could range from 800,000 to 2.2 million.

“Contrary to the claims of many media outlets and so-called fact-checkers, this nationally representative scientific poll confirms that a sizable number of non-citizens in the U.S. are registered to vote,” Agresti said.