Poll: Millennials, the new voting juggernaut, are 2-to-1 Democrats

Democrats can be encouraged and Republicans have cause for concern in 2018 if millennials who identify as Democrats vote in the midterm elections. 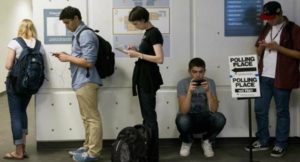 A poll released on Dec. 5 by Harvard University’s Institute of Politics found that 65 percent of those aged 18-29 favor Democrats, compared to 33 percent for Republicans.

“American political institutions are at a tipping point,” said John Della Volpe, polling director at the Institute of Politics. “Millennials are now the largest generation in the electorate. This poll and the Virginia election show that they are becoming more motivated – and I believe the fear that exists today about our future will soon be turned into the fuel that will reform our government. The only question is whether this comes from inside or outside the traditional party structure.”

Key findings from the Harvard poll: