A large majority of Americans say the major media are reporting news “they know to be fake, false, or purposely misleading,” a poll released on June 28 found. 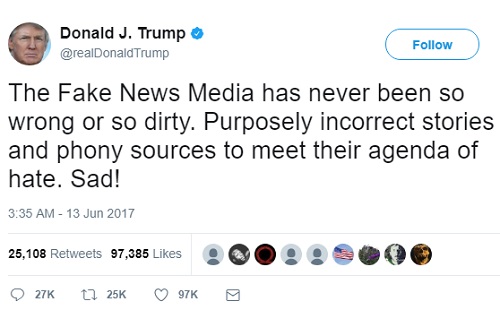 The poll, conducted by Axios and SurveyMonkey, is in line with other recent polls conducted by Pew Research and Gallup.

The survey also found that 57 percent of Democrats say they use Google searches to verify facts. Less than half of Republicans, or 48 percent, do the same.

In 1976, trust in media was at 74 percent, according to Gallup. That number dropped to 32 percent in 2016, the last time Gallup polled on the question. Just 14 percent of Republicans said they trusted the media in that poll.

President Donald Trump on April 30 tweeted: “The Fake News is going crazy making up false stories and using only unnamed sources (who don’t exist). They are totally unhinged, and the great success of this Administration is making them do and say things that even they can’t believe they are saying. Truly bad people!”