An overwhelming majority of Americans want law and order restored in the country after riots have devastated many cities, a new poll found. 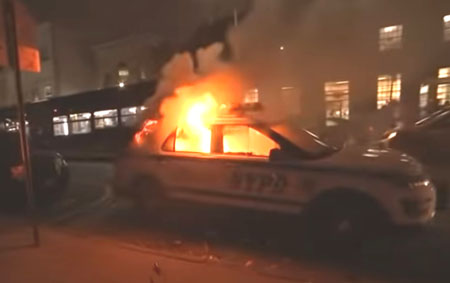 Additionally, calls from Black Lives Matter, other assorted leftists and anarchists, and their media allies to “defund the police” are not supported by the majority of Americans, the latest poll from McLaughlin & Associates for Secure America Now showed.

Asked if they believed defunding police would lead to an increase in crime, 68 percent said yes, including 47 percent of African Americans. Some 41 percent of blacks disagreed.

The biggest majority in the survey, 83 percent, said that “small minority businesses were unfair victims of the looting and rioting that took place during the protests over George Floyd’s death.” That included 79 percent of blacks.

“When put in the context of the violent protests, looting, and rioting, the majority of voters unequivocally believe in law and order,” read the analysis of the survey of 1,000 likely general election voters, who were 36 percent Democratic, 33 percent Republican, and 31 percent Independent.

“Candidates for political office should continue to support funding their local police departments as the best way to keep crime from rising,” added the analysis from pollster John McLaughlin.