The FBI alleges that the Russian-based cyber-crime operation DarkSide is responsible for shutting down the Colonial Pipeline, which delivers nearly half of the U.S. East Coast’s fuel supply.

“The FBI confirms that the DarkSide ransomware is responsible for the compromise of the Colonial Pipeline networks. We continue to work with the company and our government partners on the investigation,” the bureau said in a statement on Monday. 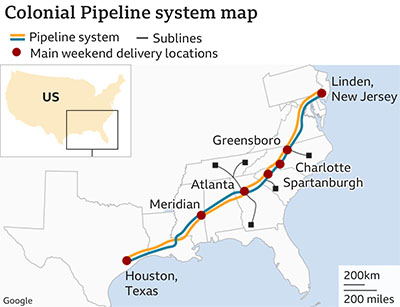 The pipeline, which on a daily basis delivers over 100 million gallons of oil from Texas to the Northeast, has been inoperable since Friday.

In a statement on Monday, Colonial said it expected to “substantially” restore operational service by the end of the week.

In a news release posted to DarkSide’s website on Monday, the hacker group did not mention Colonial Pipeline by name, but under the heading “About the latest news” noted that “our goal is to make money, and not creating problems for society.”

DarkSide’s statement said its hackers would launch checks on fellow cyber criminals “to avoid social consequences in the future.” It added the group was “apolitical” and that observers “do not need to tie us” with any particular government.

Joe Biden on Monday called the ransomware incident a “criminal” activity, adding there is no evidence so far to show the Russian government is directly connected in DarkSide.

If the pipeline was not quickly reopened, the impact on prices could become more severe in the coming days, said Patrick De Haan, head of petroleum analysis at GasBuddy.

“We’re realizing the gravity of it is maybe worse than what we’d expected,” said De Haan. “There’s still a little breathing room, we’re starting to run low on it. But Monday, Tuesday if there’s no news, you know we’re dealing with something fairly significant.”

The pipeline is the country’s biggest conduit for refined products, spanning more than 5,500 miles from Pasadena, Texas to Linden, New Jersey and New York Harbor. It serves some of the country’s transport hubs, including its busiest airport, Hartsfield-Jackson in Atlanta.

“A one-to-two-day outage is really a minor inconvenience,” said Andrew Lipow, president of Lipow Oil Associates. But by day four or five, he said, “we could see a much greater widespread impact through large areas throughout the mid-Atlantic and the southeast.”