In testimony before the House Judiciary Committee on July 12, however, Strzok said his “patriotism” made it impossible for him to be blackmailed. 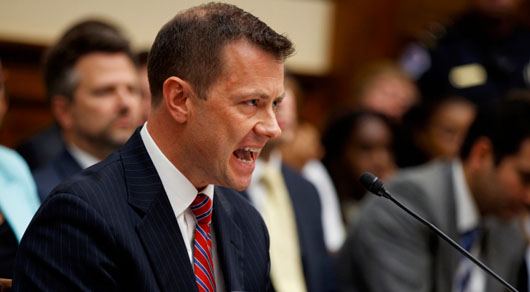 Strzok discussed the issue in an exchange with Rep. Karen Handel, Georgia Republican:

HANDEL: I have found your testimony today, frankly, to be quite remarkable in its disingenuousness, and you have shown a disturbing degree of denialism about your actions and the impact of those actions. I think we would all agree that everyone does have personal viewpoints. That is very true, but against Strzok, there is a very big difference between someone expressing his or her political views generally and someone leading an FBI investigation making highly negative and explosive comments about the actual target of that investigation. Would you agree? That’s a yes or no.

STRZOK: Can you rephrase the question? I don’t understand.

HANDEL: You have a really awesome talent for filibustering. Think about running for the Senate. I’ll just say again, you are the lead investigator, and you made highly negative, explosive comments about the actual target of an investigation. That is distinctly different from an individual expressing his or her political views.
…
What I also find stunning is that someone in your role and responsibilities that you’ve had engaged in such grossly unprofessional, unacceptable, and unethical behavior. Now, truly ironic – did I hear you say earlier you’re in a senior position at the HR division for the FBI?

HANDEL: That’s very ironic. So let me ask you this. You were in a supervisory role within the FBI; suppose you found out that one of your direct reports was sending the kind of text messages that you were sending about the target of an investigation that they were working. What action would you take?

STRZOK: Ma’am, if they were sending personal opinion about a political matter, that’s their business. I think given my experience to date, I would caution them against doing that on a government device.

HANDEL: Suppose you found out that one of your direct reports was having an extramarital affair with a colleague or someone outside the bureau. What action would you take?

STRZOK: Ma’am, it depends. If it was…if it was against the FBI’s regulation in terms of somebody being in their chain of command or below them – which is inappropriate or not allowed by regulations – I would tell them and report that. If it was permitted in our regulations, I would probably talk to them and say, Hey, look; I’m aware of this, and you need to take into consideration what you’re doing and the appearance of it.

HANDEL: Obviously, you understand the gravity of the transgressions, engaging in the kind of behavior that you’ve been engaging in – especially with the extramarital affair. It opens up an agent to exploitation and even blackmail. Given the fact that you have and currently hold a high-level security clearance, did you ever discuss your relationship with Ms. Page with HR or anyone around your security clearance?

STRZOK: They were well aware of it.

HANDEL: When did they become aware of it?

STRZOK: Well, when it was kind of made very public by the media after it leaked late last year, but ma’am, if I could tell you, your premise that it makes it susceptible to blackmail – I never, never could have been blackmailed or coheres by the nature of that relationship. The nature of my patriotism and the nature of what I believe in this country, you could not, nobody could have made that.

Investigative reporter Sara Carter first raised the prospect that both Strzok and Page could be vulnerable to blackmail by foreign actors during a January appearance on Fox News.

“The Lovebirds. They were having an affair, they were both married, they’re working counter-intelligence. That’s enough for blackmail,” Carter said. “Now they’re sending text messages on an unsecured phone. Believe me, the Germans, the Russians, the Israelis, everybody is going into those phones and trying to suck out all the information they have.”