How’s that election integrity working out?

At least 288 individuals were caught on video depositing more than one ballot in Pennsylvania ballot drop boxes during the 2021 off-year election. 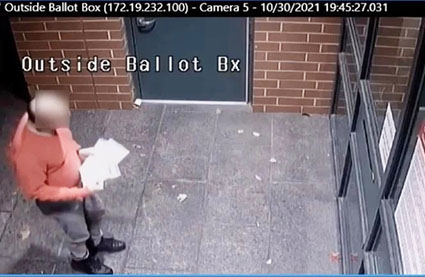 None of them will be prosecuted, according to one county’s district attorney.

Lehigh County District Attorney Jim Martin said on Monday that there were likely hundreds of instances where people deposited more than one ballot into drop boxes between Oct. 18 and Nov. 2, 2021, WFMZ reported.

The state’s Election Code requires that each voter deposit/deliver only their own ballot.

Joe Vichot, Chairman of the Lehigh County Republican Committee, first alerted county officials that individuals had deposited multiple ballots at drop boxes during the 2021 election, according to a news release from Martin’s Office.

Following an investigation, Martin said he found that there were likely hundreds of instances where people deposited more than one ballot into drop boxes between Oct. 18 and election day, Nov. 2, 2021. In that time, 7,196 ballots were deposited and counted in Lehigh County. Based upon the review by detectives, at least 288 people deposited more than one ballot in the various drop boxes, all of which were under video surveillance, according to the news release.

“Based upon the sampling, it is clear that many more than just those observed deposited more than one ballot,” Martin said.

Some of the individuals depositing more than one ballot have been identified. But Martin said they won’t be prosecuted.

There will be no prosecution brought as a result of the investigation “because to prosecute those few whose identity can be proven would be unfair and unjust given the much larger numbers who cannot be identified and who also deposited multiple ballots,” Martin said.