While Trump supporters were fully engaged in the “Stop the Steal” campaign in the days leading up to the Jan. 6 rally in Washington, D.C., then-Vice President Mike Pence, who would play a key role in the events of Jan. 6, was hitting the slopes in Colorado. 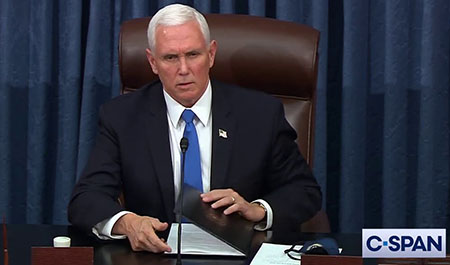 The bill to taxpayers for Secret Service protection alone was $757,527.85, according to documents obtained by Citizens for Responsibility and Ethics in Washington (CREW).

The documents show Pence’s Secret Service entourage of at least 48 agents stayed at several different hotels in the Vail area and rented 77 cars for the trip. The charges included more than $270,000 at the Marriott Vail Mountain and more than $80,000 at the Ritz Carlton.

Mike and Karen Pence were the only two listed protectees on the documents.

During his speech at the Jan. 6 rally, President Donald Trump repeatedly called on Pence to defer the certification of Joe Biden electoral votes in contested states back to the state legislatures.

Pence refused, saying in a statement: “It is my considered judgement that my oath to support and defend the Constitution constrains me from claiming unilateral authority to determine which electoral votes should be counted and which should not.”

During a recent interview with conservative commentator Lisa Boothe, Trump didn’t include Pence on his list of “very good” Republican leaders and potential 2024 presidential candidates.

During the interview, Trump said: “It’s too bad Mike Pence didn’t go back, because you would have had a much different result had Mike Pence gone — he could have said, ‘I’m sorry, but this was not approved by the state legislature, and according to the Constitution, it had to be.’ ”