Pelosi just says no to impeachment; What now for Democrats, media?

House Speaker Nancy Pelosi, who married into a political family having been born into one, has opted out of an attempt to impeach President Donald Trump. At least for now. 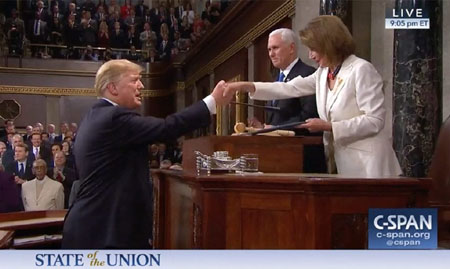 “Unlike the drooling backbenchers eager to draw up articles of impeachment, Pelosi knows politics,” wrote Dan Flynn in an email for American Spectator.

“I’m not for impeachment,” Pelosi said in a March 6 interview conducted for a future issue of The Washington Post Magazine.

“This is news,” she added. “I haven’t said this to any press person before. But since you asked, and I’ve been thinking about this, impeachment is so divisive to the country that unless there’s something so compelling and overwhelming and bipartisan, I don’t think we should go down that path because it divides the country. And he’s just not worth it.”

“The crazy talk of various freshman members hurts the brand,” Flynn wrote. “She hopes that this puts the Democratic caucus back on track. The prize, after all, is 2020.”

In a March 11 editorial, the New York Post said that Pelosi “is surely up to speed on what evidence Democrats actually have against Trump and has a fair sense of what Special Counsel Bob Mueller’s report will say. And she recognizes that it’s nothing that will persuade anyone who hasn’t wanted Trump ousted since Election Day 2016.”

The New York Post continued: “Now, will Pelosi call off the dogs? Committee Chairmen Jerry Nadler and Adam Schiff will keep on subpoenaing away, and grandstanding for the cameras – in hopes of maybe somehow, someday, somewhere finding some genuine dirt, while at least harassing the president, his family and associates and feeding an endless string of breathless this time, Trump is going down reports.”

Just as impeachment would be bad for the Democrats, the editorial continues, “chances are Americans will note that the press has been blaring those ‘scoops’ for more than two years now, and not a one has panned out. Keeping it up only shows that not just the Democratic Party, but also most of the media, can’t stop themselves from playing to the unhinged left.”