PBS counsel has remedy for children of Trump supporters: ‘We’ll put them into re-education camps’

The principal counsel for taxpayer-funded PBS called for Homeland Security to take away the children of “Republican voters”, cheered a spike in covid deaths in “Red States” and said Americans are “so f—ing dumb.”

Michael Beller was filmed by Project Veritas calling for the children of Trump supporters to be “put…into re-education camps.” 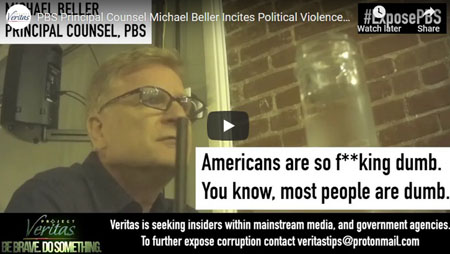 Beller divulged his radical agenda to Project Veritas when an undercover reporter asked, “What are you going to do if we [Democrats] don’t win?”

Beller also compared President Donald Trump to Adolf Hitler: “In these times, which are unique — I mean Trump — Trump is close to Hitler.”

“We go for all the Republican voters and Homeland Security will take their children away,” Beller stated on camera. “We’ll put them into the re-education camps.”

Then he euphemized the term to “enlightenment camps,” which he insisted would be “nice” with “Sesame Street characters in the classrooms” as the children would be forced to “watch PBS all day.”

“Kids who are growing up, knowing nothing but Trump for four years, you’ve got to wonder what they’re [the children of Trump supporters] going to be like,” he suggested.

Beller said he was happy to live in Washington, D.C. as opposed to a bumpkin-filled small town.

“Americans are so f—ing dumb. You know, most people are dumb. It’s good to live in a place where people are educated and know stuff,” Beller insisted. “Could you imagine if you lived in one of these other towns or cities where everybody’s just stupid?”

Beller also said he believes “what’s so great” is that the coronavirus is “spiking in all the Red States right now.”

“So that’s great,” Beller said of the covid surge in Republican strongholds. “A lot of them [Red State voters] are sick and dying.”

Beller was fired following the release of the video.

“It is outrageous that a senior executive at a publicly funded media institution is calling for such persecution of political opposition,” Project Veritas founder James O’Keefe told his supporters via email. “How can we trust Mainstream Media staffed by individuals like these? Tax dollars pay their salaries.”