Pastor Brunson is free but persecution of Christians continues to rise, unchecked

Although Andrew Brunson called on President Trump in Washington after leaving Turkey in a U.S. military plane, worldwide persecution of Christians has reached an all time high.

The former Christian missionary was arrested on bogus charges over alleged links to political groups, including the banned Gulenist movement after the failed coup attempt in 2016 against the Turkish Erdogan regime. Brunson spent two years in Turkish prisons. 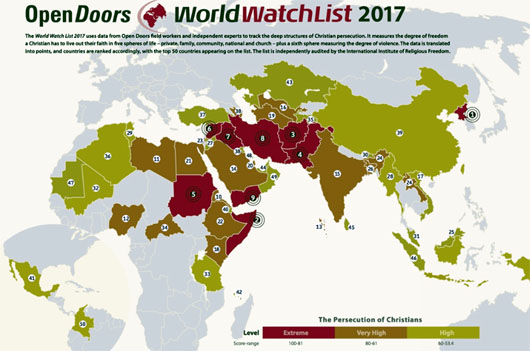 But despite Brunson’s celebrated release, for the third year in a row, the persecution of Christians worldwide has hit another record high. Approximately 215 million other Christians experience high, very high, or extreme persecution with North Korea remaining the most dangerous place to be a believer

Islamic extremism is responsible for initiating oppression and conflict in 34 other countries. And there is no equivalent counter movement by church groups in the U.S. and the West to oppose it.

In the West, persecution of Christians is an anti-establishment form but in Asia it is fueled by dramatic religious nationalism and government insecurity. Tottering governments aim to gain support by scapegoating Christians.

Persecution in the top 50 most dangerous countries increased, with the most violent occurred in Pakistan surpassing previous higher levels in northern Nigeria.

In “Open Doors” 2018 World Watch List (WWL), an annual ranking of the 50 countries where approximately 215 million Christians experience high, very high, or extreme levels of persecution, one in two Christians live where Christianity is “illegal, forbidden, or punished”.

The Roman Catholic Church has sought to negotiate tolerance from governments like the Chinese Communists who prosecute the religious, but particularly Christians. Just how futile such negotiations and agreements may be is that while reports emerged that a long-awaited deal between China and the Holy See was imminent in early September, Beijing was shutting down Zion Church, a large house church in Beijing, and further tightening restrictions on sharing religious material online.

In fact, China is currently engaged in the worst crackdown on Christians in decades.

Asia News, the official press agency of the Pontifical Institute for Foreign Missions, reported authorities were “burning crosses on the bell towers, replacing them with the red flags of China; slogans praising the Party and the values of socialism are displayed on religious buildings, erasing sacred images that are considered too Western.”

Persecution of Tibetan Buddhists and Falun Gong practitioners also continues, and in Xinjiang up to a million Uyghur Muslims have been detained in “re-education camps”.

The crackdown in China’s most western areas is severe with Muslims detained without charge, sometimes for activities as simple as praying, wearing Islamic clothing, refusing to eat pork or drink alcohol, or reading the Koran. Families of those sent to re-education camps are not told where their relatives are being held or when they will be released. There is no access to legal counsel or the right of appeal.

Chinese Communists have always restricted religious activity. In the first three decades of communist rule it used violent tactics. But after the death of Mao and over the past 40 years, the policy was one of control rather than outright repression, and there were periods of relaxation in some areas.

However, Xi Jinping has pursued a severe crackdown on all human rights, including religious freedom, since he came to power in 2013. In March this year, it was announced that religious affairs would now be “Sinicized” by placing the Communist Party’s United Front Work Department in charge of them.

Pastor Brunson is free but persecution of Christians continues to rise, unchecked, WorldTribune.com