‘Party of misinformation’: Trump stings with new one-liners in Nebraska

Disinformation? As in “Fake News”?

As Democrats and their media allies were concocting defenses of Team Biden’s new Ministry of Truth (Disinformation Governance Board), former President Donald Trump was reminding a massive crowd gathered at his rally in Greenwood, Nebraska on Sunday how he was the target of the Democrats’ “misinformation” early and often during and after the 2016 election. 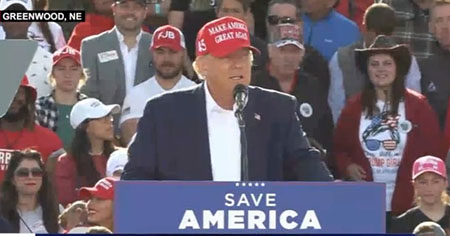 “The election was rigged and stolen and now our country is being destroyed because of it … the border, Afghanistan … this is the most dangerous time in the history of our country,” Trump told the crowd.

Trump delivered an updated series of his patented one-liners during the rally, including:

•”We’re going to end crazy Nancy Pelosi’s political career once and for all.”

• “If we don’t solve the past the same thing is going to happen again.”

• “Fox is trying to have Trumpism without Trump. Doesn’t work that way!”

• “The greatest threat to the public health in our cities is not Covid, it’s the Democrats’ weak on crime agenda and policies.”

• On California: “I think if you had a fair election, it’s a winnable state. So true! The Democrats are so crazy, we can win anywhere!”

• “If the Radical Left doesn’t want you to speak, why would you think they want you to vote?”

‘Party of misinformation’: Trump stings with new one-liners in Nebraska added by Editor Two on May 3, 2022
View all posts by Editor Two →