The families of the Brazilian girl, Vanessa Martins Figueiredo, and Thai doctor, Kansuda Wichaisuek, said both were healthy and had no pre-existing health conditions before getting the shots.

Vanessa’s mother, Alice Romano, said in a Facebook post: “My daughter just died because of the Pfizer vaccine”.

Romano posted this message on Jan. 10, the day of her daughter’s death: 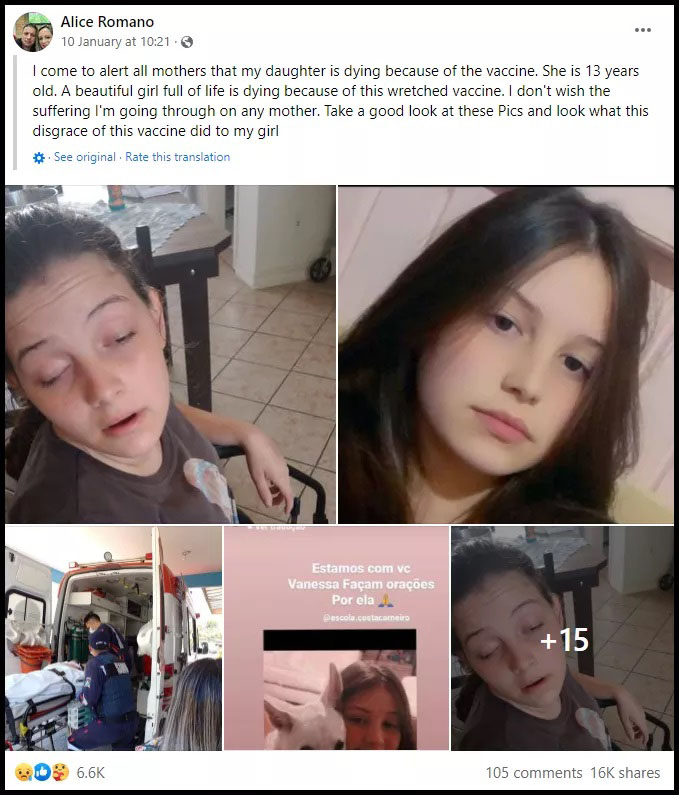 The girl suffered facial paralysis and weakness on one side of her face. She underwent treatment with the medicine corticosteroids (an anti-inflammatory) for her condition, but her health worsened over the weeks and she was hospitalized on Dec. 29 with respiratory problems. The 13-year-old was then intubated and transferred to the Joana de Gusmão Children’s Hospital in Florianópolis on Jan. 2.

Wichaisuek, also known to her friends and family as “Dr. Po”, got her booster on Dec. 7 and became seriously ill ten days later. She died on Jan. 7, The Covid World reported.

Wichaisuek suffered no immediate symptoms after getting the booster, but ten days later started to experience side effects including high temperature and fever. She took a Covid test which came back negative and blood was also drawn which showed no problems, the report said.

She was taken to a hospital on Dec. 23. Po’s symptoms improved after five days and she started rehabilitation at Ratchburi hospital. But she unexpectedly suffered a setback, and on Jan. 4 she messaged her father about high fever and a drop in her blood pressure. On Jan. 6, she suffered a sudden cardiac arrest and was resuscitated multiple times. However, she became brain dead after a period of being unconscious, the report said.

Suraphon, Dr. Po’s father, was devastated: “My daughter had received the booster shot, but the doctors try not to mention any relationship to the vaccination. She was never sick before the vaccine, but after vaccination, she was always sick. I was already skeptical about the vaccine, but I had no evidence to show her why.”

Valentina Boscardin Mendes, 18, contracted pneumonia and suffered a fatal thrombosis or blood clot on Jan. 9 after being admitted to a hospital in her native Sao Paulo in Brazil, reports say.

Valentina’s mother, Marcia Boscardin, said her daughter had received the recommended two doses of the Pfizer Covid jab and had no underlying health problems.