A team of independent auditors has been hired by the Arizona Senate leadership to conduct a “comprehensive, full forensic audit of the 2020 election in Maricopa County.” 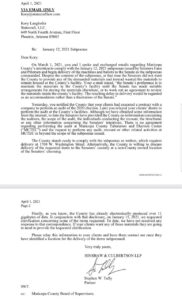 The audit includes a hand recount of all ballots and an audit of the “electronic voting system”.

The news led to flurry of activity by county officials and including a letters from an attorney representing the county.

In response to the announcement of the audit, the Maricopa County Board of Supervisors held an emergency meeting on Thursday and refused to allow the audit to take place at the county’s “Tabulation Center”, adding “let us know where you want the ballots delivered.”

“The audit will validate every area of the voting process to ensure the integrity of the vote,” said a press release from Arizona Senate Republicans. “The scope of work will include, but is not limited to, scanning all the ballots, a full manual recount, auditing the registration and votes cast, the vote counts, and the electronic voting system.”

The audit, first announced on Wednesday, will be completely independent without any involvement of Senate leadership. A report is expected to be issued in about 60 days.

“Our people need to be assured that the Senate and Maricopa County can work together on this audit, to bring integrity to the election process,” said Arizona state Senate President Karen Fann. “As Board Chair Sellers and County Recorder Richer wrote in the Arizona Republic ‘a democracy cannot survive if its people do not believe elections are free and fair.’ They also acknowledge a significant number of voters want the additional assurance that a full forensic audit might bring. I look forward to continued cooperation.”