Opinion: Before getting angry, make sure you qualify

In the minds and actions of the Left, “not all anger is created equal,” investigative journalist Daniel Greenfield notes.

“If you want to know who has privilege in a society and who doesn’t, follow the anger,” Greenfield, a Shillman Journalism Fellow at the Freedom Center, wrote for Front Page Mag on June 20. 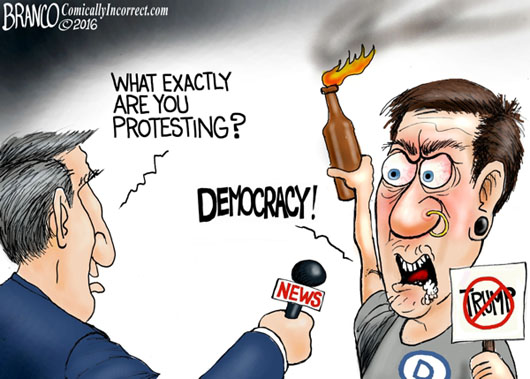 Greenfield noted that “there are people in this country who can safely express their anger. And those who can’t. If you’re angry that Trump won, your anger is socially acceptable. If you were angry that Obama won, it wasn’t.”

Congressional baseball shooter James Hodgkinson’s anger “was socially acceptable,” Greenfield wrote. “It continued to be socially acceptable until he crossed the line into murder. And he’s not alone. There’s Micah Xavier Johnson, the Black Lives Matter cop-killer in Dallas, and Gavin Long, the Black Lives Matter cop-killer in Baton Rouge. If you’re black and angry about the police, your anger is celebrated. If you’re white and angry about the terror travel ban, the Paris Climate treaty, Obamacare repeal or any leftist cause, you’re on the side of the angry angels.”

“But if you’re white and angry that your job is going to China or that you just missed being killed in a Muslim suicide bombing, your anger is unacceptable,” Greenfield wrote.

The Left’s kind of good anger “gets you a gig as a CNN commentator,” Greenfield wrote. “Bad anger gets you hounded out of your job.”

Left-wing anger over the elections of Bush and Trump “was sanctified,” Greenfield wrote. “Right-wing outrage over Obama’s victory was demonized. Now that left-wing anger led a Bernie Sanders volunteer to open fire at a Republican charity baseball practice outing. And the media reluctantly concedes that maybe both sides should moderate their rhetoric. Before listing examples that lean to the right like ‘Lock her up’.

“Why were chants of ‘Lock her up’ immoderate, but not Bush era cries of ‘Jail to the chief’? Why were Tea Party rallies ‘ominous’ but the latest We Hate Trump march is ‘courageous’? Why is killing Trump on stage the hottest thing to hit Shakespeare while a rodeo clown who wore an Obama mask was hounded by everyone from the lieutenant governor of Missouri to the NAACP?”

Greenfield noted that “intersectionality frowns on expecting civil behavior from ‘oppressed’ protesters. Asking that shrieking campus crybully not to scream threats in your face is ‘tone policing’. An African-American millionaire’s child at Yale is fighting for her ‘existence’, unlike the Pennsylvania coal miner, the Baltimore police officer and the Christian florist whose existences really are threatened.”

The left “prides itself on an unearned moral superiority (‘When they go low, we go high’) reinforced by its own echo chamber even as it has become incapable of controlling its angry outbursts,” Greenfield wrote. “The national tantrum after Trump’s victory has all but shut down the government, turned every media outlet into a non-stop feed of conspiracy theories and set off protests that quickly escalated into street violence.

“The media dresses up the seething rage so that the Left never has to look at its inner Hodgkinson in the mirror.”

Monopolies on anger “only work in totalitarian states,” Greenfield wrote. “In a free society, both sides are expected to control their anger and find terms on which to debate and settle issues. The left rejects civility and refuses to control its anger. The only settlement it will accept is absolute power. If an election doesn’t go its way, it will overturn the results. If someone offends it, he must be punished. Or there will be anger.”

The Left’s anger privilege “is often cast in terms of oppressed groups,” Greenfield wrote. “But its anger isn’t in defiance of oppression, but in pursuit of oppression. Anger privilege is used to silence opposition, to enforce illegal policies and to seize power.”

Millions on the Left, “just like Hodgkinson, are told every day that Republicans are responsible for everything wrong with their lives, the country and the planet,” Greenfield wrote.

“Leftist anger is a privileged bubble of entitlement that bursts every other election. Its choice is to try to understand the rest of the country or to intimidate, censor, oppress and eventually kill them.

“James Hodgkinson took the latter course. His personal leftist revolution ended, as all leftist revolutions do, in blood and violence. The left can check its anger privilege and examine its entitlement. Or his violence will be our future.”

Anger privilege: Left believe only they are allowed to be pissed off, angry leftists, James Hodgkinson, make sure you qualify, Opinion: Before getting angry, tone policing, WorldTribune.com