George Soros, who has long been an advocate for open borders and immigration reform, has a long and formidable wall embedded with cameras and security sensors around his massive estate in the Hamptons.

It is a magnificent security barrier “that would make Donald Trump dream at night,” a reporter said. 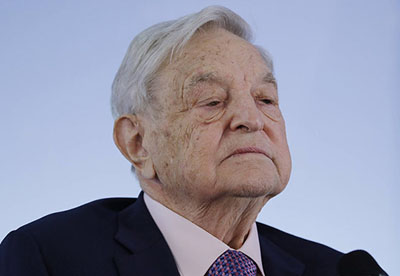 The Daily Caller’s Benny Johnson traveled to the posh New York enclave to get a glimpse of the sprawling Soros estate as part of the “Walls Across America” series which highlights “the best walls” in the country.

“You are not going to believe what is behind me,” Johnson said in a video report (see below). “That massive white barrier that stretches as far as the shot probably shows you…is not, I repeat is not a model of the wall that Trump wants on the border, it is not, I repeat, a set from Game of Thrones, it is not…a recreation of the Great Wall of China to keep the Mongolians out. It is indeed George Soros’ own personal great wall. George Soros has a wall that would make Donald Trump dream at night.”

Standing in front of a doorway in the wall, Johnson notes, “It seems like, to get into the place that George Soros loves, where George Soros lives, you’re going to have to use a legal port of entry.”

President Donald Trump has often noted that America’s rich and powerful choose to live behind large walls for protection.

“Some have suggested a barrier is immoral,” Trump said during a national address from the Oval Office last week. “Then why do wealthy politicians build walls, fences and gates around their homes?”