A research paper which claimed taking hydroxychloroquine to treat COVID-19 could be fatal has been retracted. President Donald Trump and conservative Fox News Host Laura Ingraham have frequently spoken out on the potential of the treatment for successfully treating the virus thereby rendering hydroxychloroquine radioactive on social and corporate media.

The Lancet first published the research on more than 96,000 patients from 671 hospitals worldwide using data from the the U.S. company Surgisphere. The company includes a small staff who have little or no medical or science backgrounds, reports said. 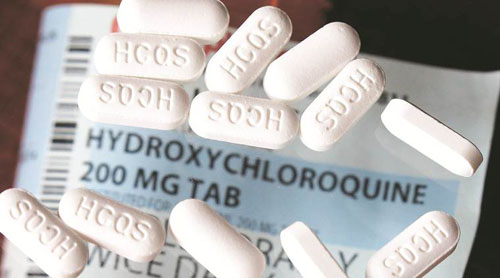 The Guardian reported that Surgisphere “has so far failed to adequately explain its data or methodology” and says that the company’s “handful of employees appear to include a science fiction writer and an adult-content model.”

The World Health Organization and several world governments had halted trials of hydroxychloroquine because of the study. They have since restarted the trials, The Guardian reported Wednesday.

More than 100 scientists quickly challenged the study’s methods, writing to The Lancet that in some cases medical records did not match the actual patient.

The Lancet first published an “expression of concern” with the study after the “serious scientific questions” were brought to its attention. It then retracted the report altogether on Thursday.

The major media widely used the bogus study to push the narrative that hydroxychloroquine should not be used to treat coronavirus patients. President Donald Trump has consistently touted the drug’s use for treating the virus and has said he was taking it as a prophylaxis.

A number of U.S. physicians have said they have seen success in the prescribing hydroxychloroquine to coronavirus patients. Supporters say hydroxychloroquine has been used safely for 60 years to prevent and treat malaria by blocking parasites from invading red blood cells. Its anti-inflammatory properties have been proven effective in treating Lupus and some skin diseases.

The Food and Drug Administration is one of many agencies and institutes conducting clinical trials.

The now-disputed research paper relied on the examination of hospital files to conclude that the drug, in combination with an antibiotic, is ineffective and can cause heart problems. More than 14,000 patients were given the drug, with or without an antibiotic, in 671 hospitals on six continents from December to April.

The May 22 Lancet article said: “We were unable to confirm a benefit of hydroxychloroquine or chloroquine, when used alone or with a macrolide, on in-hospital outcomes for COVID-19. Each of these drug regimens was associated with decreased in-hospital survival and an increased frequency of ventricular arrhythmias when used for treatment of COVID-19.”

Often missed in the corporate media’s coverage was the study’s warning: “A cause-and-effect relationship between drug therapy and survival should not be inferred. These data do not apply to the use of any treatment regimen used in the ambulatory, out-of-hospital setting. Randomized clinical trials will be required before any conclusion can be reached regarding benefit or harm of these agents in COVID-19 patients.”

The media watchdog group NewsBusters noted that network newscasts on ABC, CBS and NBC all ignored experts who raised “serious scientific questions” about the data used for the research.

“All three [networks] had used the study to chide President Trump for pushing the drug and taking it himself,” NewsBuster analyst Nicholas Fondacaro, who studied the coverage, wrote.

“The broadcast networks ignored the new revelations, but combined for one minute and 30 seconds pushing the study on May 22, the day it was published. ABC dedicated a 20-second news brief to the study, CBS gave it 37 seconds, and NBC had 33 seconds,” Fondacaro wrote.

A separate paper, which also used the Surgisphere data, was retracted by The New England Journal of Medicine (NJEM). Earlier this week the NEJM issued an “expression of concern” regarding the study published May 1 that suggested widely used blood pressure medicines were not raising the risk of death for people with COVID-19.