Obama grants most ever pardons in a single day

President Barack Obama on Dec. 19 pardoned 78 inmates and cut the sentences of 153 others convicted of federal crimes. It was the most individual clemencies ever granted by a president in a single day.

“The 231 individuals granted clemency today have all demonstrated that they are ready to make use — or have already made use — of a second chance,” White House counsel Neil Eggleston wrote in a blog post. “While each clemency recipient’s story is unique, the common thread of rehabilitation underlies all of them.” 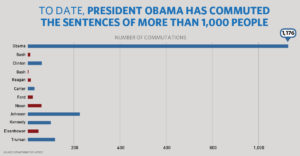 Of those granted clemency on Dec. 19, 54 were serving life sentences.

The previous single-day record of 151 commutations was set by Franklin D. Roosevelt in 1935.

Eggleston said Obama will continue to review clemency applications and is expected to grant more pardons and commutations before he leaves office.

Obama has used his clemency power to reduce the sentences of 1,176 inmates, more commutations than the previous 11 presidents combined, according to the White House. About a third of them, 395, were serving life sentences.

In 2014, Obama sought to bring attention to what his administration described as over-sentencing in federal prisons by directing the Justice Department to prioritize petitions for commutations from nonviolent offenders who the administration said were serving longer sentences than they would receive today if they were convicted of the same crimes.

“We must remember that clemency is a tool of last resort and that only Congress can achieve the broader reforms needed to ensure over the long run that our criminal justice system operates more fairly and effectively in the service of public safety,” Eggleston said.

Neil Eggleston, Obama grants most ever pardons in a single day, WorldTribune.com