The New York Post, in a Feb. 16 editorial, took its uptown rival The New York Times to task for “hostile, hysterical” coverage “based on anonymous leaks” and “no hard facts.”

“Take a deep breath and realize how precious little substance there is in all the breathless reporting about supposed skulduggery by President Trump, his team and the Russian government,” the Post said. 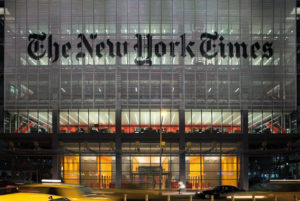 The editorial cites the New York Times story on Feb. 15 headlined “Trump Aides Had Contact With Russian Intelligence” — which “was remarkable for containing the same facts the Times reported back in October” under the headline “Investigating Donald Trump, FBI Sees No Clear Link to Russia.”

The Post notes that “both reports say various Trumpites talked to figures in Russia’s government — but that U.S. investigators found nothing to show they’d discussed the U.S. election, or that anyone on Team Trump was even aware of any effort by Moscow to influence it.”

“How many times can the Times recycle the same stuff and still call it news?” the Post editorial said.

The unsourced reports by the Times amount to “narratives that could come out of a creative writing class,” the Post said.

“The source for all of it, time and again, is ‘current and former’ officials — with no sense of how many are actually current, or how former officials know anything about an ongoing investigation.”

The editorial noted that “one of the reporters on all these stories is our old pal Matt Apuzzo — who is presumably working the same highly dubious FBI sources he used back in 2011 when he was with the Associated Press, in his error-riddled series of smears of the NYPD’s Intelligence Division.

“Apuzzo’s sources back then plainly resented the first-rate work of Commissioner Ray Kelly’s crew — and that the NYPD had hired ex-CIA experts to build the division. What agenda are they working now?

“Yes, Apuzzo won a Pulitzer for that series, and parlayed it into a Times job. But all that really tells you is that propaganda can prosper under the guise of journalism.”