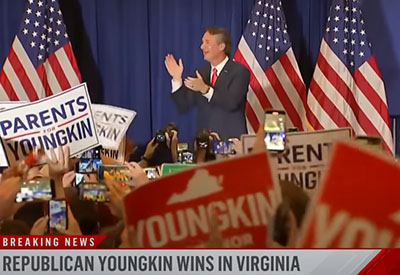 Leftist media hacks tried their best to assert that Youngkin’s victory had nothing to do with Trump, but the results were clear.

“I’ve heard Virginia is blue, but I’ve never believed it was blue,” Trump said during an interview on local radio in Virginia on Wednesday morning. “Without MAGA he (Youngkin) would have lost by 15 points, more … instead of giving us credit they say, ‘oh he’s more popular than [Trump].’ ”

Trump said in a statement: “I would like to thank my BASE for coming out in force and voting for Glenn Youngkin. Without you, he would not have been close to winning. The MAGA movement is bigger and stronger than ever before.”

Washington Times columnist Cheryl K. Chumley noted: “Virginia’s next governor will be a Republican. Virginia’s next lieutenant governor, attorney general, majority in the House of Delegates — all will be Republicans, day-after voting counts increasingly show. Everywhere you look, Democrats are being rejected. The radical left that’s taken over the Democrats’ messaging is being rejected.”

In the race for borough president of Staten Island, New York, Trump endorsed Vito Fossella 48 hours before the primary election in June. In the general election on Tuesday, he also taped a robocall, and Fossella won big last, 60 percent to 30 percent.

In his victory speech, Fossella repeatedly thanked Trump and told supporters, “Tell President Trump what Staten Island thinks of what he has done!”

In the mayor’s race for Hialeah, Florida, Trump endorsed Esteban “Steve” Bovo, who avoided a runoff, winning 59 perent of the vote against a former mayor of Hialeah.

“The power of President Trump’s endorsement is undeniable,” said Brian Jack, the former Trump White House political director. “In 2020, his record in congressional special and primary elections was 120-2, and last night, he was 4-0 in general elections in Virginia, Ohio, New York, and Florida. Results don’t lie.”

“President Trump continues to be a huge boost for Republicans across the country,” added Republican National Committee Chairwoman Ronna McDaniel.

Florida Republican Gov. Ron DeSantis, in a Fox News interview about the changing of the political party guards in Virginia and beyond, said: “I think people are rebelling against what the Democrat Party stands for nowadays.”

Meanwhile, New Jersey’s neck-and-neck gubernatorial race could be headed to a recount.

Democrat incumbent Gov. Phil Murphy and Republican Jack Ciattarelli remain in a dead heat and at one point were less than 500 votes apart the day after the polls closed.

“Every pollster was wrong. This is likely to be a recount race, either way,” former Gov. Chris Christie told TownHall.com. “There’s a very legitimate chance Jack could win this.”

In New Jersey, there is no automatic recount, but any candidate can request a recount within 17 days after an election by applying to a judge of the Superior Court that oversees the district or districts involved in the recount.