Not Redskins; It’s now the Commanders? ‘Hail to the Commies?’

The Tampa Bay Buccaneers are the Bucs.

So the Washington Commanders are the Commies? 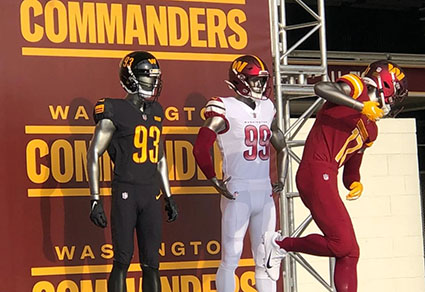 That is one of many jokes circulating online after the Washington NFL franchise officially announced on Wednesday that Commanders is the team’s new name.

It took two years to come up with the new name. The list of finalists included Armada, Presidents, Brigade, and Redhawks.

“What this effort really is at its core is not landing on a name that was going to be unanimously loved by everybody but to start a process by which we can continue to preserve what’s best about the Burgundy and Gold,” team president Jason Wright said. “Those have been colors and a name and a franchise that, when you have trouble talking to each other on other topics, you can come together and hug and high-five and be one while cheering this team on.”

From the city which is home to the Chiefs, the Kansas City Star ran with the headline: “Washington Football Team’s new name doesn’t command respect from NFL fans”.

For 83 years, they were the Washington Redskins, but the leftist cancel culture mob took care of that.

Many observers noted that the pro sports naming overlords are now 1 for 3 in new team names.

The new NHL team in Seattle is the Kraken. That one gets the thumbs up (but don’t flash the OK sign).

The new name for the Cleveland Indians is the Guardians, which many consider one of the dumbest team names in history, except for the woke White House, which said it “certainly supports” the name change.

After Wednesday’s announcement, many are now pining for the days of the Washington Football Team.

When former Washington quarterback Joe Theismann on Monday leaked that Commanders would be the team’s name, legions of fans were hoping that team owner Dan Snyder, when he stepped to the mic for Wednesday’s announcement, would acknowledge Theismann was joking. He did not.

One legacy. One unified future.

From 1938 until 2019, the following fight song was played at home games after a Washington touchdown:

A social media user suggested a new fight song for the Commanders:

Not Redskins; It’s now the Commanders? ‘Hail to the Commies?’ added by Editor Two on February 2, 2022
View all posts by Editor Two →