He might still be more powerful than a locomotive and be able to leap tall buildings in a single bound, but the new woke Superman will no longer fight for “truth, justice, and the American Way”.

The Man of Steel’s new motto is “truth, justice, and a better tomorrow.” 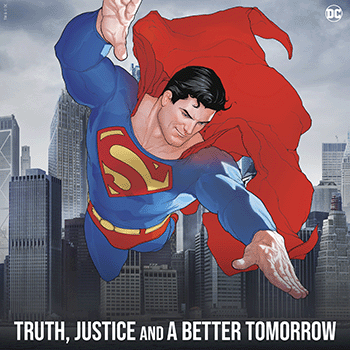 Much to the delight of Marxists everywhere, Superman has come out as a globalist in the secular humanist mold.

According to DC Chief Creative Officer and Publisher Jim Lee, woke Superman “will better reflect the global storylines that we are telling across DC and to honor the character’s incredible legacy of over 80 years of building a better world. Superman has long been a symbol of hope who inspires people from around the world, and it is that optimism and hope that powers him forward with this new mission statement.”

The new motto of Clark Kent’s Superman will be seen in future comic books, film, TV, and video games, the company said.

Jonathan Kent, a.k.a. the new Superman, is also going to fight what the woke mob refers to as “real-world problems” such as climate change, protesting the deportation of refugees. And he will date a “hacktivist.”

Dean Cain, who starred as Superman/Clark Kent in the 1990s TV series “Lois & Clark: The New Adventures of Superman”, said: “I say they’re jumping on the bandwagon, but they’re fighting the wrong issues. There is a clear agenda here. It’s globalist, it’s anti-America, but it’s not bold and it’s not brave.”

Cain added: ” ‘Brave’ would have been to do some of this 30 years ago. Or to depict Superman, or Jon Kent, fighting for the rights of LGBT people in Iran where they’ll throw you off a building for the ‘offense’ of even being suspected of homosexuality. And why doesn’t Superman fight the injustices that created the refugees whose deportation he’s protesting? Digging deep into those issues — that would be brave. That would be informative. I’d read that comic book.”

‘Not brave’: Former star unimpressed as Superman spurns the ‘American Way’ added by Editor Two on October 17, 2021
View all posts by Editor Two →