Any more talk about the Russia investigation and Robert Mueller should come in the form of an apology, President Donald Trump said in response to the special counsel’s May 29 statement. 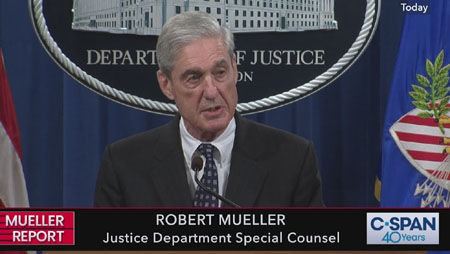 Mueller, who did not take questions, reiterated the conclusions of his report and said he was resigning from the Department of Justice, closing the special counsel office and returning to private life.

The president immediately called for closure on what he says is the continuing Democrat effort to paralyze governance under his administration.

The Trump-Pence campaign dispatched an email signed by the president that told supporters, “America doesn’t want to hear another word about the Mueller Report, unless it’s an apology from the Left and their Fake News friends.”

“I faced unprecedented obstruction every day for TWO YEARS, and it is only a matter of time before they make up another LIE about our incredible movement,” said the Trump email.

“Democrats wasted TWO YEARS investigating me and my administration, only to fail. A TOTAL DISGRACE!” it said. “While they spent their time conducting the world’s BIGGEST WITCH HUNT, I was working for YOU and now America is WINNING AGAIN. Our economy is booming, the Wall is being built, and we are finally respected on the world stage again.”

Mueller said he would not go beyond the report in testimony. “The report is my testimony,” he said.

In his statement, however, Mueller did not shoot down claims that he had concerns about White House obstruction efforts into his investigation. “That is sure to spark further calls for investigation by congressional Democrats eager for impeachment hearings,” the Washington Examiner noted.

The Trump team said it was “case closed” and time to call an end to the two years of questions — but also admitted that isn’t likely.