North Korea ‘experts’ agree on the certainty of uncertain outcomes

JEJU ― Ask an expert analyst how to deal with North Korea, and the responses range from getting tough to massaging gently.

Nobody has the real answer ― though some people like to talk with absolute certainty ― and there’s no proof that anything’s going to work.

The differences were sharply etched during last week’s Jeju Peace Forum at which former Korean foreign ministers sparred on the issue and soothsayers from the U.S., China and elsewhere exchanged quite different views. Nobody seemed to disagree more than Song Min-Soon, foreign minister under the late President Roh Moo-Hyun, and Yu-Myung-Hwan, foreign minister during the first half of Lee Myung-Bak’s presidency. 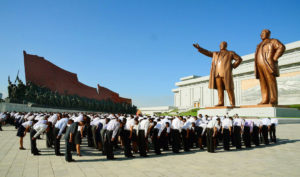 Listening to Song talking about dealing with the North, you might get the impression, if only we just met, all would be okay. His favorite word was “engage” ― engage in dialog, “engage, change and manage crisis.”

Toward that end Song came up with “the inside-out” theory of change in the North. By “engaging” we could expose them to “a better life” and approach North Korea “from inside out.”

Good one, but Song seemed to have missed a couple of obstacles. The first is that North Korea’s deep-digging, far-reaching security apparatus would sniff out any sign of North Koreans falling for the lure of “a better life” with the South Koreans. The second is that the talks would break down as soon as the North Koreans sensed what the South Koreans were up to. Then what? Where would the talking go if the two sides didn’t agree on anything?

Yu had a sensible answer to the question. Efforts at engagement had not only failed but had “saved time” for the North Koreans ― that is, given them time to go on developing nukes and missiles befitting the “military first” songun policy.

Okay, then, what about sanctions? Yu thinks strengthening them has been “effective” but believes one more step would really tighten the screws. How about “blocking the flow of foreign currency” into North Korea so they could no longer do business in yuan, dollars, euros or yen? Then what would happen?

To sanction or not to sanction, to toughen or lighten them, was a favorite theme of panel discussions. G. John Ikenberry, a professor at Princeton University’s Woodrow Wilson School, called for “much more sanctioning” amid “a general view in the U.S.” that the North Korean issue “is becoming more dangerous.”

Ikenberry saw “a mixture of coercive diplomacy” along with “illumination to good things” that would happen for the North Koreans if only they saw the light.

“There is a sense North Korea is not going to give up its nuclear weapons, that nuclear weapons are part of its identity,” he said in enormous understatement. That’s “deeply destabilizing to the region.”

There were, he said, “two options” ― “one is a kind of acquiescence” in which “we acknowledge them as a nuclear power” while “the other option is definitely putting more pressure on the North Koreans.”

Amazingly, Ikenberry seemed blissfully unaware of the implications of his view. He was not in favor of a military option, that is, going to war to force the hand of North Korea’s leader Kim Jong-Un. But what if coercive measures had no effect? He had no response when I asked the question other than to say he was all in favor of talking to the North Koreans.

Peter Hayes, founder and director of the Nautilus Institute, known for what its website calls “innovative cooperative engagement strategies in North Korea,” warned, “Anything is possible with North Korea in the next year, certainly for the next two or three years.”

Whatever “the Americans have in mind with the Chinese,” Hayes pinned his hopes on “the concept of a comprehensive settlement.” If Washington and Beijing had “the political vision,” he could even see “a treaty of amity in Northeast Asia.” As for sanctions, “They will not lead to collapse of the regime” and “will not stop nuclear armament.”

Chinese panelists at the Jeju forum all declared their support for sanctions ― despite not exactly being in favor of strengthening them.

“Pressure in the form of sanctions may be necessary,” said Zhengqiang Pan, a retired major general, but he didn’t seem too confident. “North Korea continues to upgrade capabilities. All the countries have an obligation to create an environment where North Korea feels comfortable.”

There was just one overwhelming problem. “Each country has a fear: if you do not have adequate deterrence, you may suffer,” said Gen. Pan. “China supports sanctions in trying to give some signal to North Korea. Sanctions should serve as a window to open opportunity.” But, he cautioned, “Excessive sanctions could lead to a backlash.”

Amid pronouncements such as these, there was only one certainty. If the experts agree on anything, it’s basically, the future lies ahead.

Donald Kirk, journalist and author, has been writing about the standoff on the Korean Peninsula for decades. He’s at kirkdon4343@gmail.com.