North Carolina elections officials say they are working to remedy problems from the past election which led to confusion after the late reporting of early votes and hundreds of ineligible voters casting ballots, including at least 441 felons and 41 noncitizens.

A post-election report from NC Board of Elections executive director Kim Strach was provided to an NC House committee on May 4. 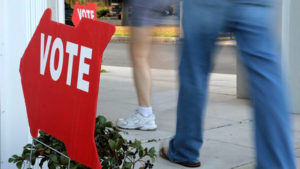 Strach said the effect on the race for governor of the late counting of early votes in Durham County was one of the top problems in the 2016 election.

Due to difficulties reading the memory cards on voting machines, the county didn’t add early voting totals to online records until nearly midnight – even though the state’s website indicated that most of the county was finished reporting totals, the Raleigh News & Observer reported.

The Durham problem led to “confusion and suspicion,” as, due to the late tally, the governor’s race abruptly changed from showing a lead for incumbent Pat McCrory to a slight lead for Democratic challenger Roy Cooper.

McCrory later requested and obtained a recount in Durham County, which showed the initial results were accurate, the report said.

Rep. Harry Warren, a Salisbury Republican, called on the Board of Elections to carefully review data it recently obtained that could show if any voters cast ballots in multiple states. That information only recently arrived and wasn’t part of the audit.

“I think that is where we see the biggest opportunity for voting violations,” he said. “I don’t think we let our guard down. If just one vote is invalidated by a fraudulent vote, that’s one vote too many.”

Strach told legislators that Durham officials handled the problems effectively, but the state’s election-results website failed to make clear to the public that the tallies were incomplete.

“We needed to have a process change,” Strach said. “If those early voting numbers are not in there, we need to let you know that. That’s an improvement that you will see next time we have an election.”
Strach said another problem involved felons who cast ballots while serving sentences. In North Carolina, a convicted felon can vote only after completing his or her sentence, including any probation or parole.

The elections agency now will have a statewide database that makes it easier for election workers to check criminal records.

“We are putting those processes in place to make it easier for our counties to remove felons, and do that on the front end when they register,” Strach said.

The problem of noncitizens voting is a different matter, Strach said.

“There is not anywhere a citizenship database,” she said, adding that the agency is checking records of the U.S. Department of Homeland Security that list immigrants in the country legally. “We have to rely on the fact that when you check that box and lie to us, that’s a felony. I think that’s about the best we can do.”

Rep. Michael Speciale, New Bern Republican, voiced concern about the lack of a database. “We could in theory have tens of thousands of non-citizens that we don’t know about,” he said. “I’m not saying we do, but in theory we could.”

“North Carolina ought to be proud of the election system that they have had running, both under Democratic and Republican administrations,” he said. “Why do we want to keep messing with a system that has worked? It’s unbelievable to me.”