Just how radical is this publication? A July 15 article doubles down on the Defund the Police movement at a time when every progressive politician in America is desperately scurrying away from it. “We understand that abolition is the long game. We’re in it for as long as it takes,” a subhead reads. The text is no less belligerent: 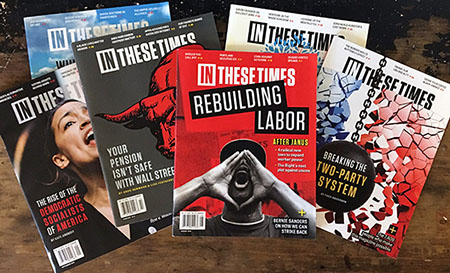 But this May 25, the anniversary of George Floyd’s murder, was a painful reminder of the collective trauma the people in Minneapolis and across the country experienced last summer, and too many summers before. We still have not received healing in the form of transformative justice.

Here in Minneapolis, a commission of unelected bureaucrats blocked the council’s recommendation to defund the police. Today, the MPD continues to function using tens of millions of taxpayer dollars, while our calls for investment in true public safety have failed to be adopted.

Here’s what In These Times tweets out on the Fourth of July:

In an Independence Day speech in 1901, socialist leader Eugene Debs declared: “I like the 4th of July. It breathes a spirit of revolution. On this day we reaffirm the ultimate triumph of Socialism. It is coming as certain as I stand in your presence.” https://t.co/2ELPvm7em4

“Proudly” socialist – do you get the idea?

In short, In These Times loves “democratic socialism.” Which means it loves Sen. Bernie Sanders (I-VT).

“Here is a corporation that has shut down plants all over this country, moved to countries where they could find the cheapest possible labor,” [Sanders] told correspondent Jake Tapper. “In fact, the guy who was head of General Electric before Jeff Immelt, he basically said that he’d like to see his manufacturing plants on a barge so they can move to the cheapest labor.”

His remarks referenced Jack Welch, CEO of GE from 1981 to 2001, who in 1998 mused: “Ideally, you’d have every plant you own on a barge to move with currencies and changes in the economy.”

So, why then is In These Times taking money from General Electric via its GE Foundation philanthropic arm?

From the magazine’s 2018 annual report, published in 2019 – its most recent one available on its website:

In the following pages, we… pay tribute to the foundations that support us.

“Foundations & Organizations” donors to In These Times listed as part of the magazine’s “2018 Publishing Consortium” include:

Last week, we wrote about the severely compromised leftist “news site” The Texas Tribune and how it likes to play the “our donors don’t tell us what to do” game. In These Times, despite ostensibly being a part of a revolutionary movement of like-minded “comrades,” feels compelled to do the same when it comes to the sources of its funding. From its “About” page:

We accept gifts, grants and sponsorships from individuals, organizations and foundations to help with our general operations, coverage of specific topics, and special projects. Our news judgments are made independently — not based on or influenced by donors. We do not give supporters the rights to assign, review or edit content.

PPI funders have included the weapons manufacturer Raytheon, Dow Chemical and General Electric, along with the right-wing Bradley Foundation, which funds the American Legislative Exchange Council…. [T]here is nothing “progressive” about PPI…

This is the socialist “journalism” equivalent of Bernie Sanders buying three houses!

The same awkward association occurs with Apple. In 2019 In These Times wrote up a scathing critique of its corporate greed. “Instead of Enriching Shareholders, These Companies Could Give 8 Million Workers a $46,000 Raise,” the headline proclaimed. “How public companies like Nike and Apple are shifting money away from workers to the already very wealthy,” ran the subhead underneath.

Again, this article came in the same year that In These Times was being funded by Apple.

• Are Apple and GE attempting to stifle direct criticism from such outlets with their financial donations? Articles calling out the two corporations by name seem to have been far more prevalent at In These Times a few years ago than since 2020.
• Is In These Times in the process of “selling out” to the corporations that finance it or does it delude itself that it can take the dirty corporate money and still be a fierce socialist platform against the evils of capitalism?

And the most interesting question:

• Is the socialism vs. global capitalism “clash” today a total con job meant to conceal the fact that both sides are devout internationalists with very good reason to work together?

We already know so-called “liberal” establishment big-box media outlets are owned by corporate titans Jeff Bezos (Washington Post) and Carlos Slim (largest New York Times shareholder). But now even the so-called “radical” publications calling for the overthrow of capitalism are being funded by super-corporations such as Apple, Google and GE.

What does it mean? Is all the noise and turmoil we see splashed across the 24-hour news cycle every day nothing more than an elaborate theatrical play as our national sovereignty is being methodically erased simultaneously from the progressive socialist left and big business fake right?

Question: Why does the GE Foundation give money to a magazine that openly proclaims it wants to implement socialism in America and also fund neoconservative organizations such as the McCain Institute?

Answer: For the same reason it funds aggressively pro-refugee heavyweight globalist NGOs such as CARE and the International Rescue Committee.

As it explicitly says of itself, the GE Foundation has a global mission (bold added):

The GE Foundation, the philanthropic organization of GE (NYSE: GE), is committed to building a world that works better. We empower people by helping them build the skills they need to succeed in a global economy.

Not a better America. A better world.

That same 2016 statement reveals GE’s close relationship to the GE Foundation, making any assertions that “the two entities are entirely independent of each other” completely implausible. Note the groups the GE Foundation is aligning with here. Culturally leftist, racially divisive, pro-illegal immigration and pro-big business:

Deborah Elam, chief diversity officer and president of the GE Foundation, will retire from GE at the end of the year. Elam has greatly advanced GE’s diversity and philanthropy efforts.

Under Elam’s leadership GE has received significant recognition from notable organizations including Working Mother Media, Fortune Magazine, the Human Rights Campaign, Military Times, GI Jobs, The National Urban League, Asia Society, Black Enterprise, The Executive Leadership Council, Points of Light, The US Chamber of Commerce, The US Hispanic Chamber of Commerce, and many more. Elam has also personally received numerous significant awards and accolades over the course of her career.

Jeff Immelt, chairman and CEO, GE said, “Deb has always been a strategic advisor to me as we have developed the culture of GE. Her unparalleled ability to make connections in diverse communities and provide insight and advice on key issues has been so valuable to GE’s growth.”

On the flip side, a dead giveaway about leftist “pro-worker” outfits like In These Times is that they are invariably all-in on mass immigration. It goes without saying that if these people truly cared about protecting American workers and their wages, labor conditions and job security, then they would staunchly oppose the cheap labor floodtide that is illegal and much of legal immigration in America today. But instead, we get this:

This really isn’t too hard to decipher. Destroying individual sovereign nations and folding them into the globalist one-world master plan is seen as a boon by both multinational capitalism and internationalist socialism. There is no mystery here. There is no conflict of interest or hypocrisy or any other term you may be considering.

Here we have globalists all around who ultimately are on the same side. The common enemy: nationalism.

Go back to that brief moment in time when the Occupy Wall Street leftists were actually protesting against the right people, even if their position was not always correct or even at times coherent.

There must have come a moment of epiphany somewhere along the way as these would-be warriors against impersonal corporate greed stood before the temples of international finance. A realization that they were positioning themselves against other destroyers of the hated “old world” of sovereign nations. Fellow travelers on the road of “progress” towards the new one-world way.

Though they undeniably have severe disagreements with these people on many things, ultimately, these socialists must have been fundamentally uncomfortable aligning against other potent forces that are helping to point the way to a trans-national order.

So they turned their fury instead on the middle and even working class. Those regular folks who make up the citizenry of a nationhood that they wholeheartedly despise. Occupy Wall Street fully surrendered to Critical Race Theory. It would be war on Main Street America.

There they found the global corporations already waiting for them.