No ear mics allowed for debate moderators; But what about the candidates?

While presidential debate moderators are not allowed to wear earpieces during the proceedings, the Federal Election Commission (FEC) has not specifically ruled out the use of ear mics for Hillary Clinton and Donald Trump in the first debate on Sept. 26.

A voter in Maryland wrote FEC Commissioner Matthew Petersen on Sept. 8 seeking a “clear response” to the matter. 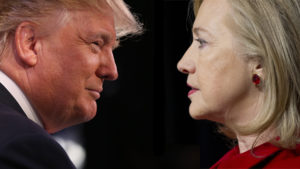 “I read reports that during the televised event questioning each of the candidates on their qualifications to serve as Commander in Chief, that Secretary Clinton had a microphone in her ear to receive prompting and guidance from advisers off stage,” wrote Laurence B of Columbia, Maryland.

[A check of his name and address at the Maryland State Board of Elections Internet site verified the writer’s identity as a registered voter.]

“Surely this is a more serious violation of competition than the doping which the Olympics have had to clean up. … Can you please confirm that your commission will take conclusive steps to ensure that no such cheating takes place during the debates?” the letter concluded.

When he received no response, he wrote again on Sept. 21: “I’ve got to say I’m really discouraged not to have received a confirmation from you or from your office that your policy will be to disallow the two candidates to wear ear microphones. Am I to interpret your lack of a response to mean that such behavior will, indeed be accepted?”

That correspondence got an immediate and lengthy response in “legalese” from an attorney with the FEC:

“Good afternoon, my name is Ruth Heilizer and I am an attorney with the Federal Election Commission (‘FEC’ or ‘Commission’). I have been asked to respond to your email to FEC Chairman Petersen regarding your suggestion that presidential candidates Hillary Clinton and Donald Trump be prohibited from wearing ear microphones during the upcoming presidential debates.

“The Federal Election Campaign Act of 1971, as amended (‘Act’) and Commission regulations require that the contents of a complaint meet certain specific requirements. In particular, a complaint be in writing, sworn to and signed in the presence of a notary public and notarized. Unfortunately, your email did not meet these requirements.

Persistent citizen Laurence B. gave it one last try:

“As a lawyer, I’m sure you can differentiate between a complaint, and a request for a clear statement of rules. My email is seeking the latter. … I would be very grateful if you could let me know whether or not there is a clear rule prohibiting candidates from wearing ear mics and if so, whether or not it is your intention to enforce that rule.”

He has yet to receive a response.

Carlos Greer of the Commission on Presidential Debates sent out a message to news organizations on Sept. 9 banning devices that would allow presidential debate moderators get directions from their news teams.

NBC’s “Today” anchor Matt Lauer wore an earpiece Sept. 7 when he conducted interviews with Hillary Clinton and Donald Trump at the “Commander-in-Chief Forum which was severely criticized by liberal media commentators.