New Mexico official: The cartels are ‘kicking our butts’

The shutting down of two secondary Border Patrol checkpoints in a major drug smuggling corridor has been disastrous for a New Mexico county and, by extension, the nation, an official said.

The checkpoints were removed to focus more on processing illegals pouring over the border, Couy Griffin, chairman of the Otero County, New Mexico county commission, told the Conservative Review in an interview published on May 13. 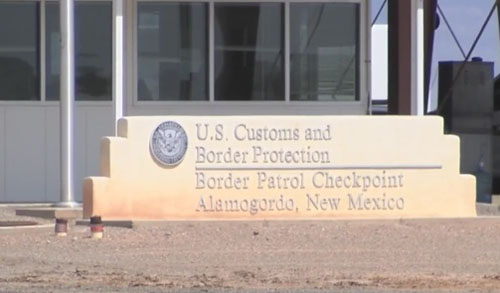 Removing the checkpoints exposed the county to unprecedented criminal activity from the Mexican cartels, Griffin said.

“The cartel is winning and winning big; they are kicking our butts,” said Griffin, commissioner of a sparsely populated but large county bordering Texas, near El Paso.

“We get so tied up and focused on the asylum seekers or the illegal immigrant aspect of what’s going on at our southern border, but the reality of it is that it’s nothing but a mere smoke screen for the cartel,” Griffin said.

“They’re using these large groups of migrants as nothing more than a smoke screen to smuggle their drugs across the southern border. Meanwhile, as soon as those agents are exhausted, those critical spots, they’re sending boatloads of drugs across the border in unsecured areas. The shutting down of the checkpoints on the major drug smuggling corridors is a recipe for disaster. Now they have a green light to shuttle drugs through our counties and through our rural areas, with no security in place.”

Otero County is not on the international border but has two highways originating from the two main border towns where illegal immigrants are entering and cartels are operating – U.S. Highway 70 and U.S. Highway 54, the Conservative Review noted.

For years, there has been a checkpoint on each highway on the way to Alamogordo, the foremost town in Otero County. Griffin noted that while the cartels used to relegate their activity to remote parts of the southeast corner of the county, “Now, with our checkpoints being shut down, there’s no need to take it out to the middle of nowhere when they can just run it right up to the main road.”

Otero County Sheriff David Black told the Conservative Review that his three-man narcotics team and other deputies now have to deal with the cartels without any help from Border Patrol: “We have rerouted all of our overtime money to interdictions on the highway.” Black noted that his informants tell him the large stash houses in El Paso and even in source cities in Mexico like Juarez are now empty because the cartels “are taking advantage of the unprecedented open borders because nothing is stopping them.”

There are six checkpoints in the El Paso Border Patrol sector: one in El Paso County, Texas, two in Otero County and three in Doña Ana County, New Mexico. Customs and Border Protection confirmed that all six remain shut down.

The Conservative Review noted that “While the politics of Doña Ana County and the central state government in the urban areas of Albuquerque and Santa Fe have rolled out the welcome mat to illegal immigration and cartel activity, officials in the more conservative and rural counties, such as Otero and its neighboring county to the north, Lincoln, resent the secondary effects and fear that more is coming.”

Lincoln County Sheriff Robert Shepperd told the Conservative Review that “I’ve never seen all these checkpoints closed in my life, and I’ve been in Lincoln and Otero Counties for 30 years. I have friends who are out on ranches who now have to lock their doors and do things they shouldn’t have to do. It’s eerie watching these checkpoints look like ghost towns.”

The more conservative rural counties in New Mexico also “must deal with the open-border policies” of Gov. Michelle Grisham, a Democrat, the Conservative Review noted. Earlier this year, Grisham “scoffed at the notion that there even was an emergency and initially rebuffed requests for help from Hidalgo County when it was slammed with thousands of migrants. She even removed the National Guard troops from the border, who could have been used to free up more border agents, so they could return to the checkpoints.”

Last month, the Otero County commissioners declared an emergency in the county over the closer of the checkpoints. “If Governor Grisham really had a heart for the people, she would redeploy the National Guard to our border, which would relieve those agents from the border to come back to our checkpoints, but she won’t do that,” Griffin told the Conservative Review.

“The politics of our state is what’s killing our state,” Griffin added. “It all just boils down to politics.”

The New Mexico sheriffs seem certain that things will only get worse.

Sheriff Shepperd said “It’s like the calm before the storm.”

Sheriff Black said that “About six months down the road is when we are going to start seeing a spike in property crimes and a spike in overdoses. We have not seen the worst of it yet; it’s still coming.”